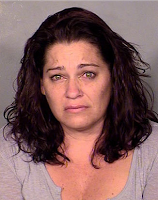 [According to an email blast from Steve Miller, Inside Vegas reporter,  former Nevada guardian Patience Bristol’s criminal record with 20 felony counts has apparently been reduced to only one felony count. ]

..."After having a public defender for several weeks, suddenly Bristol gets an expensive attorney with connections to DA Steve Wolfson, her case is transferred to another court, there is a plea deal, she's released on her own recognizance, and then ONLY ONE CHARGE remains?

Because her hearing was on December 30, the eve of a holiday (which may have been deliberate) no reporters attended.

Grave Robbery Under Color of Law

It sure seems like she's getting a big break if this is true.

Why should she be given a break unless she's singing on a bigger perp?

I hope it turns out that she does sing, but I'm afraid she's getting the deal because she has connections and that's all it takes.

Shades of John E. Clemmons, former guardian in Davidson Co, TN, who got a sweet deal on Thanksgiving Eve.

How often this happens, I bet we'd be shocked to know.