An elder-law attorney pleaded guilty Monday to stealing millions from clients in their 80s and 90s she was supposed to be helping. 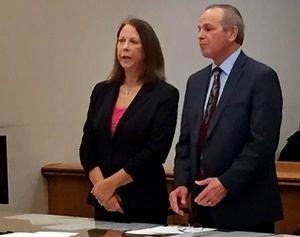 Barbara Lieberman, 62, admitted manipulating clients’ accounts to put co-conspirators in charge of the finances, then having unauthorized checks written from those accounts. She pleaded guilty to one first-degree count of money laundering, which carries as much as 20 years in prison.

Under the plea agreement, the state will recommend a 10-year term with 3½ years of parole ineligibility. She also agreed to forfeit $3 million seized by the government.

The deal did not sit well with Barbara Martin, whose dogged insistence that her aunt was a victim of Lieberman was credited by state Sen. Jeff Van Drew with helping spark the case.

“It’s an inappropriate deal. It’s a disgusting deal. It’s a joke,” Martin said when told of the terms. “Barbara Lieberman is a serial thief who betrayed her oath to uphold the law.”

Martin’s aunt, Helen Hugo, was one of many who had Lieberman as a court-appointed guardian in Atlantic County. There have been no charges in connection with Lieberman’s work in that capacity.

In March, county Surrogate Jim Curcio said “a comprehensive review of all the files in this office is underway, and appropriate Superior Court action is going to be taken.”

Nothing more has been released on that.

Here's a case that shows a scheme to defraud. She deserves to wear orange for the rest of her life.

What is the $3 mil seized by the government? Her theft profit?

What about restitution and community service?

What happens to Barbara Lieberman's victims? Are they just S.O.L. or are they going to recover any money?

I think we will hear a whole lot more about this case before it's over.

Lieberman is a crook and a liar. I would like to see the victims and their families have time alone with this crook and liar wearing a lawyer costume.

Only God above knows the other victims of this woman born with a criminal mind. I would sentence this piece of worthless trash to life in a cage with no parole with the only way for her corpse to depart is feet first to the county morgue.

I am using all my control not to unleash in this respectful public forum my personal thoughts use your imagination.

The saga of Barbara Lieberman is far from over. Have they even investigated the guardianship cases? I have a feeling there's a lot more to come.

Victims be vigilant because she's making deals and you don't want to be left in the dark.

She should be making license plates for the rest of her pitiful life.