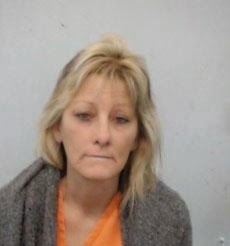 A Hernando County woman was arrested in Jacksonville this week after investigators determined she took advantage of her elderly husband, draining his bank accounts.

Spivey told police during an investigation late last year that the two had met several months prior and that she was homeless at the time.

A police report revealed Spivey took more than $100,000 from her husband's accounts after he bought her a car and a breast enhancement.

In early October, some of Tirey's neighbors told police they were concerned about his well-being. They said he suffered from various medical conditions affecting his memory, decision making and ability to walk.

When investigators interviewed Tirey he couldn't recall recent events or tell them when or where he met his wife. He did, however, tell them he bought Spivey a car. He also said he paid for the breast enhancement surgery but never saw the results.

During the investigation, the court appointed a temporary guardian to oversee Tirey's finances and well-being. He was told he would not be able to withdraw money without his guardian's approval.

In late October, Tirey called Allianz Insurance to get a "no penalty" withdrawal from his annuity. In recorded phone calls obtained by investigators, Spivey's voice can be heard in the background, instructing Tirey to have the funds sent over night.

In December, Tirey fought with Spivey and drove himself to his daughter's house in Ohio. He was disoriented and did not seem to have planned for the trip. Spivey did not tell Tirey's guardian and did not report her husband missing.

After police obtained his bank and insurance statements, they found more than $109,411 had been withdrawn.

On Tuesday, Spivey was arrested in Jacksonville by the Florida Highway Patrol after officers obtained a warrant. She was charged with exploitation of the elderly and organized scheme to defraud.

She was booked into the Columbia County jail where she later bonded out.

Here we go. He gets conned and then guardianized. It goes from bad to worse.