As a child, Linda Carestia loved visiting her "Auntie Irma's" toy shop on her visits to the Jersey Shore.

Her aunt — really a much older cousin — let her pick any toy she wanted, provided it wasn't too big for her to lug home on the train back to Massachusetts.

Along with the sweet taste of salt water taffy and the deep-fried aromas along Atlantic City's famed boardwalk, those toys made Schwarzberg's adopted home seem like a magical place. It was easy to see why Schwarzberg, whom Carestia describes as a feisty, "spark plug" of a woman, left Massachusetts and settled in Ventnor.

Decades later, though, when the two reconnected following the death of Schwarzberg's brother in 2009, the magic was gone.

By then, Schwarzberg, long divorced, lived by herself in a neglected house just blocks from the beach.

Watching over Schwarzberg was a group of women Carestia didn't know.

One was Lieberman, Schwarzberg's attorney; the others were Jan Van Holt, her sister Sondra Steen, and Schwarzberg's home health aide, Susan Hamlett, Carestia and authorities say.

Van Holt, Steen and Schwarzberg have not yet pleaded to the charges against them and are presumed innocent.

In her county job, Van Holt crossed paths with Lieberman, one of a handful of private attorneys regularly assigned by the court to represent elderly clients in guardianship and estate cases in Atlantic County.

A hard-featured woman in her fifties with chopped blonde hair, Van Holt later sued the county, unsuccessfully, claiming it failed to stop a co-worker from sexually harassing her.

Van Holt stopped working for the county in 2006 and started her own business, A Better Choice. The company offered senior citizens a variety of in-home services, including running errands, scheduling medical appointments, and paying bills.

The Van Holt Carestia knew cultivated the look and lifestyle of a successful entrepreneur. She wore designer clothes and stylish scarves, and rolled up to her clients' homes behind the wheel of a shiny Mercedes, her toy dogs in tow. 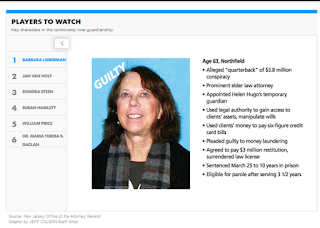 "Fancy cars and fluffy puppies" is what Carestia remembers most about her.

She also recalls Van Holt's excitement about a condominium she'd recently bought. Carestia says Van Holt even invited her and her husband, John, down for a visit to the posh island off Florida's Gulf Coast.

Years earlier, on Jan. 5, 2005, Van Holt's sister, Steen, obtained a power of attorney from Schwarzberg when she was 87, according to a record on file with the Atlantic County Clerk's Office.

A little over a year later, Steen obtained a reverse mortgage for $405,000 on Schwarzberg's home, according to county clerk records. Such loans provide cash payments based on the home's equity. 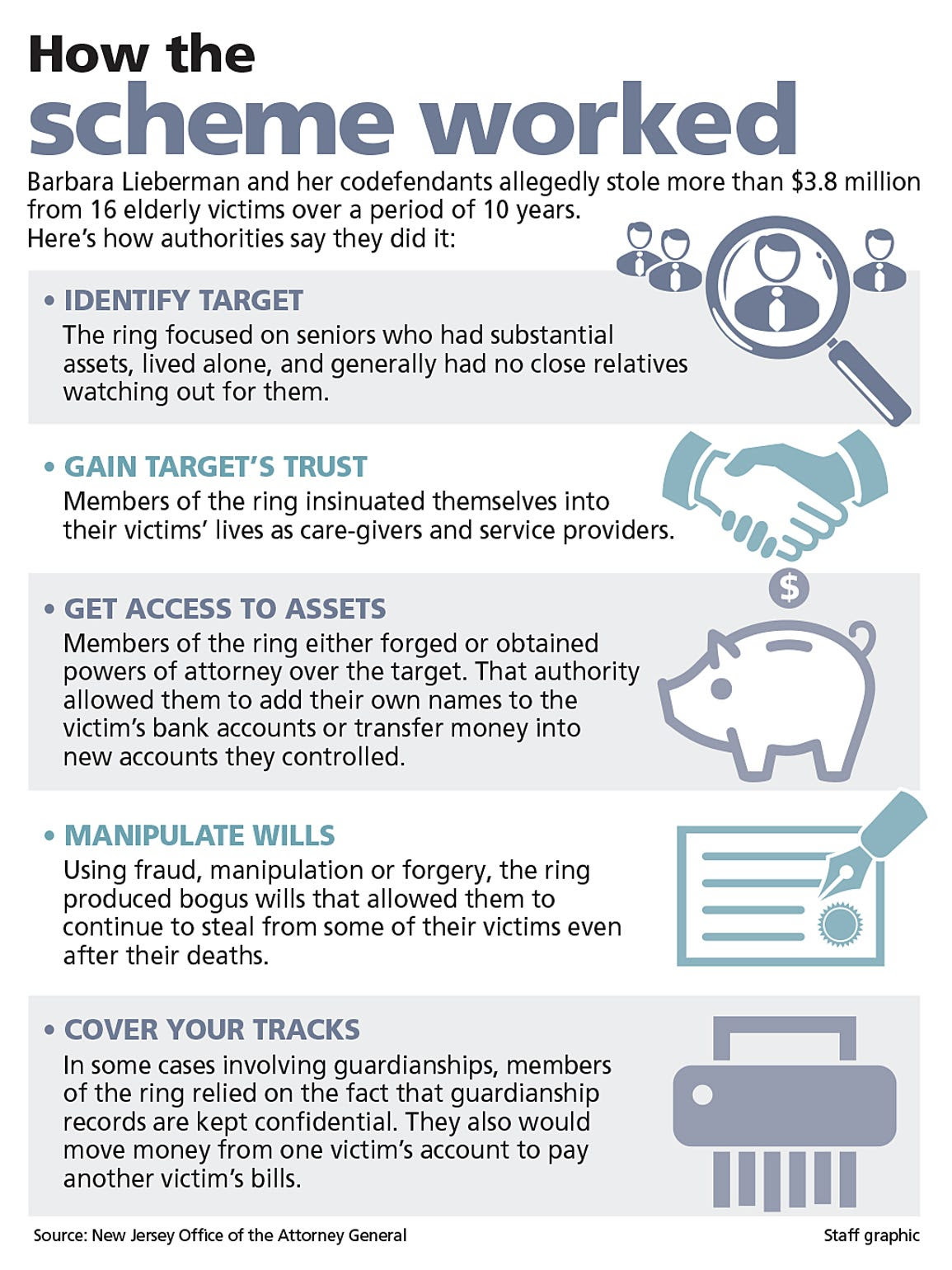 This is how authorities say the scheme worked.Click to open and close.  (Photo: Staff graphic by Jeff Colson)

Carestia says she knew none of this, but her suspicions were aroused when a piece of jewelry Schwarzberg had showed during one of her visits later disappeared.

Schwarzberg herself was missing. Van Holt told her that Hamlett, the home health aide, had disappeared with her, Carestia says.

Carestia says Hamlett had a falling out with Van Holt and brought Schwarzberg to see an attorney, who notified authorities that Schwarzberg was likely the victim of elder abuse, a chronology that a source has confirmed.

"We had no idea what was going on. This became so big. The next thing I know I'm getting calls from the state, and lawyers and judges," Carestia says

Frail and unable to pay her bills, Schwarzberg ultimately moved to a nursing home, where she died in 2013 after suffering a stroke, Carestia says. She was 95.

"It's heartbreaking," Carestia says now. "There's a lot of guilt that we carry, but we didn't know.

"There was nothing we could do."

I have not heard of this case and hope the family joins NASGA. Very, very sad.

What a well planned scheme. They should all be put in jail.