A father’s mission to reform reporting on abuse of disabled 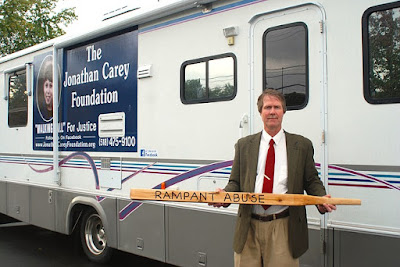 BETHLEHEM — In what Michael Carey is calling a Walking Tall for Justice Tour, he is pushing public officials to reform policies for reporting abuse of disabled individuals.


Carey will spend the next several weeks touring the state and speaking with officials to promote new legislation. He will also visit centers across the state where incidents of abuse to disabled individuals have occurred.

Carey began his tour at the Justice Center at 161 Delaware Ave. in Delmar on Tuesday, Oct. 13. He will make stops in Rome, Utica, Syracuse, through Western New York, and then travel to Long Island and New York City.

Rather than having reports of abuse reported directly to the New York State Justice Center for the Protection of People with Special Needs, Carey would have all calls reporting abuse be made to 911.

Carey hopes the added initial response recording obtained from the call would add another layer of evidence. This would also ensure all reports are investigated by first responders, as Carey fears some cases of abuse have been under-reported and under-investigated.

Calls to the Justice Center are already directed via a voice recording to call 911 in the event of an emergency. The center is considered a law enforcement agency by New York State, because it employs investigators to examine suspect cases. The agency is responsible for several state services for the disabled. It handles cases of guardianship and abuse of disabled individuals, and manages care centers throughout the state.

“Every allegation of abuse or neglect that is reported to the Justice Center is fully investigated,” said Diane Ward, director of communications at the Justice Center. The center has “strict procedures in place to ensure the safety of the population it serves,” and “those stating otherwise are misinformed,” said Ward.

Designated mandatory reporters, like teachers and doctors are required by law to report instances abuse to authorities. As such, the New York State Justice Center for the Protection of People with Special Needs receives about 7,000 reports of abuse monthly, according to their public records.  (Continue Reading)

Full Article & Source:
A father’s mission to reform reporting on abuse of disabled
Posted by NASGA

You're a good man, Michael Carey!