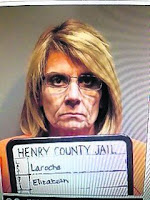 An Abbeville woman received a 5-year prison sentence Monday after she pleaded guilty to the financial exploitation of her elderly mother.

LaRoche received a 5-year sentence as part of the guilty plea. But LaRoche also submitted an application for probation, which will be heard by the court on Nov. 6. LaRoche was ordered to pay a $1,000 fine, a $500 victim’s compensation free and a $525 bail bond fee.

Sheriff’s Investigator Sgt. Steve Sanders told the Dothan Eagle after he made the arrest that the victim in the case was the suspect’s 68-year-old mother, who had given power of attorney over to the suspect after the victim was hospitalized.

Sanders said the sheriff’s office was notified by other relatives after the victim started receiving credit card bills and collection notices for purchases she did not make.

The charge also alleged the victim suffered a loss of medical benefits due to non-payment of premiums, the victim’s checking account regularly showing overdraft charges, and delinquent medical bills, including an assisted living balance which exceeded $11,000.