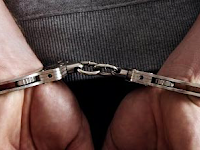 Investigators are searching for a 45-year-old former Duncan man accused of cheating a vulnerable 75-year-old woman out of over $220,000 from several loans.

McCaslin is accused of using the woman's credit and co-signature on eight different loans taken out between December 2012 and March 2014, according to an affidavit filed in court.

Duncan police began investigating McCaslin after an Adult Protective Services agent contacted them about the case. Loans with the man's and the woman's names were on loan paperwork as borrower/co-signer on the loans and lenders were attempting to collect on the loans because McCaslin had violated terms of the contracts, according to Duncan Police Detective Donny Foraker.

The woman told Foraker that she knew McCaslin because he was hired to install her sprinkler system but that she doesn't remember how they got to the point of co-signing loans for him. She said she didn't think it would hurt to help him. After losing her husband and learning she had cancer, she said, it was "just easier to go and sign the paperwork rather than talk with McCaslin" about the matters, the affidavit states. She said she received no benefit from the loans.

Foraker spoke with McCaslin in March 2015 by phone after he had moved back to Arizona.

McCaslin said the woman was one of his first customers, that he later became friends with her sons and that friendship continues, the affidavit states. He'd tried to obtain loans on his own but was told that he needed a co-signer and that the woman made the offer to assist. He said the woman became so involved with the business that he let her take over some responsibilities, such as paying bills and opening a business account at a bank.

The woman told Foraker she'd never participated in McCaslin's business and that she had been unable to speak to him. A bank loan officer said that he and McCaslin told her she didn't have to become involved with the loans but "she expressed a desire to help McCaslin with his business," the affidavit states.

Email ThisBlogThis!Share to TwitterShare to FacebookShare to Pinterest
Labels: felony exploitation of an adult elder, Oklahoma