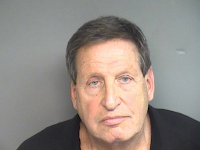 A Stamford attorney is facing larceny and forgery charges amidst allegations that he pocketed thousands of dollars from the estate trust of Stamford woman and her son and their heirs.

The family went to Stamford Police in November after they discovered that thousands of dollars were never deposited to the trust, according to police.

According to police, attorney Morris Glucksman “was the person responsible for all documents and transactions regarding the trust and he could not provide an answer for the discrepancies of the monies.”

Lt. Diedrich Hohn said the heirs “after he offered them $40,000 to make it go away and they balked and came to police.”

Police said in a statement, “Property Crime investigators discovered that Attorney Glucksman forged several signatures and utilized a forged notary stamp that made him the sole beneficiary of the trust. The family had been asking for Glucksman to provide proper paperwork showing that he was the sole heir and executor since 2013.”

Glucksman is accused of using “many stalling techniques all (the) while spending the family’s money. Investigators were able to prove that the notary stamp was altered thus leading investigators to substantiate the forgery angle of the investigation.

Glucksman allegedly withdrew $25,000 from the deceased woman’s account one day after her death at the age of 91. The 68-year-old Glucksman is accused of selling “many articles of sports memorabilia totaling $33,000 in cash and not putting the money into the trust. He rented out a Stamford Property owned by the trust for several years, all while collecting rent and pocketing the money. He finally sold the Stamford property and currently still has not distributed any of the monies towards the trust,” according to police.

According to Hohn, the woman left her estate to her son who passed away from lung cancer a year later. Their heirs are nieces and nephews.

So far, police have been able to substantiate the theft of $58,000, according to Hohn. “It is still an open investigation. We don’t know how much money might be in escrow.” Hohn said financial crimes investigators are continuing to review records to determine whether there is more money missing from the trust.

On Thursday morning, Stamford Police arrested Glucksman at his 706 Bedford St. law office where he maintains a practice for wills, trusts, estate planning, landlord-tenant and family law. He was charged with one count each of first-degree larceny and second-degree forgery.

“He has property in Florida and travels there. We wanted to arrest him before he left,” Hohn said.
Hohn also said, “He (Glucksman) has had three similar complaints against him. We want to put this out there because there might be other victims out there.”

Glucksman posted $50,000 bond and is scheduled to appear Feb. 29 in state Superior Court in Stamford.

Hohn and Capt. Richard Conklin praised the lead investigator Sean Coughlin, Sgt. Steven Perrotta and Officer Michael Stempien for “aggressively investigating this larceny perpetuated upon by an attorney who was entrusted by an elderly deceased member of the Stamford Community.”

They said, “The SPD aggressively investigates these crimes and we go to all lengths to make arrests that adversely affect the personal sanctity of any Stamford resident’s financial security. The family was notified of the arrest and was elated by the arrest and by the actions of the officers.”

When I see these stories, I wonder how many more are going on and just aren't caught.