I’ve always been one of your strongest advocates. After the 2014 election, your office accomplished more than any agency in Nevada in dealing with guardian abuse.

Unfortunately, your progress has stalled. We have received reports regarding the cases your office is currently prosecuting in Northern Nevada. The prosecutions are against family members, not professional or public guardians, who have taken advantage of seniors. These prosecutions do not include any of the notorious guardians in Clark County. It appears there is a hunt for easy targets in Northern Nevada for family members who are using small amounts of their elder’s funds. If we compare these cases to the financial exploitation now occurring in Clark County, NV, by guardians including Jared E. Shafer, April Parks, Denise Comastro, their attorneys and family court judges, the conclusion appears to be the system will not tackle this problem.

Your office has failed to go after professional guardians including Jared E. Shafer and April Parks. It appears the cases which have been presented as of this date are in the category of low hanging fruit. The perpetrators appear to be of the garden variety types who simply do not have the tools to fight back.

Charles Pascal, who had the unfortunate experience of having his mother-in-law, Marcy DuDeck, kidnapped through orders given by Jared E. Shafer, has relayed the nature of many conversations he had with this guardian. According to Pascal, Shafer told him that he along with other guardians bribed judges and attorneys and guaranteed that nothing would ever be done because there were large amounts of money involved. Pascal has told many of us that Shafer taunted him into filing complaints because he wanted to show Pascal that nothing would ever be done. And, after all these years of Pascal, myself and others filing complaints with every available agency, nothing has been done. Pascal has been giving this information to victims since 2010 and it appears what Shafer told him is sadly the ugly truth.

The Las Vegas Voice in their current February 2017 issue wrote a harsh article concerning the performance of your office along with that of District Attorney, Steve Wolfson. Many of your strongest supporters are beginning to believe the crack down on guardian abuse is turning into a dog and pony show. I’m having a very difficult time convincing victims this is not true and I am quickly losing faith. Sadly, I have to now agree with this article in that only the “low hanging fruit” is being picked and for what Shafer and Parks would consider “pocket change”.

The specific lack of inaction by your office concerns in particular, guardian April Parks. Judge Allf in Clark County family court recently ruled that Parks indeed took money under wrongful pretenses from Elizabeth Indig, a first from a judge from that Kangaroo Court. Unfortunately, your office along with D.A. Wolfson failed to follow through on the family court ruling.

Another victim, Kristina Berger, is suing Shafer and the trial is this April. She was the victim who had money stolen from her by Shafer’s employee, Patience Bristol, who was convicted. Bristol worked for Shafer and used his office, computer, phone, email, business cards and was under his supervision. The IRS would define Bristol as an employee, but Shafer has yet to suffer repercussions in this matter. Bristol will be released this November unless she is given parole this June 4th.

In the North’s case, we have an unqualified doctor and her employee being sued for submitting false documents to the court declaring both Norths to be incompetent when in fact both were competent. This doctor worked with April Parks to gain control of this couple. Since your office is infatuated with low hanging fruit, this is a ripe plum ready for the picking.

Inquiring minds want to know why April Parks has not been charged with a single crime when you have the North’s case and the Indig case with evidence of exploitation. It’s been over a year since April Park’s home, office and storage was raided, yet she remains a free woman out of state. Why has Shafer been allowed to crawl away into his home, close up his guardian office and live as a free man off my father’s money along with the huge sums of money he has bragged about taking from hundreds of victims since 1979?

We were told that indictments would occur by the election in November 2016, in particular the Jason Hanson case. Unfortunately nothing happened. Then we were told something would take place by the end of 2016. The year ended with no cases being filed. The North’s daughter, Julie Belshe, spoke with D.A. Wolfson recently and now the story is “the end of 2017”. Unfortunately, Mr. Shafer’s words about nothing being done, grows louder in our minds. This delay could go on indefinitely. Yet, a few non-professional family guardians are being prosecuted for “pocket change” for taking advantage of one person while Shafer and Parks exploited hundreds of victims to the tune of millions or possibly more?

Our patience is growing very thin waiting to see justice for all this professional guardian exploitation that has racked in millions, if not billions in the last nearly 30 years. This is money that is pumped into the Nevada economy so we all wonder if the real agenda is for officials to make sure this cash flow is not interrupted.

I will continue to support your office, however this task is becoming increasingly more difficult as each week goes by. 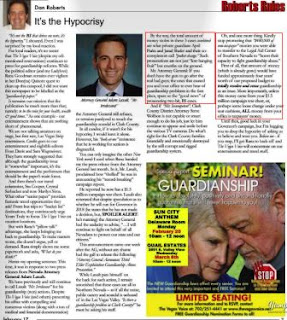 It's hard to be patient but I believe the wait will be worth it. As long as the AG doesn't announce the investigation is over, it's still underway.

The AG Adam Laxalt didn't respond to a letter sent to him regarding a current case that was prosecuted for elder abuse. The AG office sent a letter advising if you can't be at the sentencing, you can write a letter to the judge, which was done. That was a joke..not even considered. Then some family members, who were repeatedly taken care of by their elderly parents wrote letters of victim impact statements. They repeatedly claimed mistruths about what happened..no justice for the deceased.

Per the prior comment, this is an election year 2018 and these people will say or do anything to get elected. Even after you leave messages requesting a call back. What about all the other family members who should have been investigated but were not?

Find it interesting that a letter is sent to Adam Laxalt requesting a letter back in regards to a high profile case of elder abuse and he couldn't or wouldn't take the time to reply. It's all about politics and I won't be voting for him!!