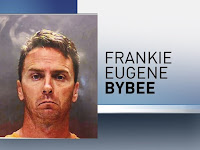 A former Sarasota County sheriff's deputy accused of exploiting and then trying to kill an elderly woman is facing more charges after he allegedly faked an email that got her committed for evaluation.

Frankie Eugene Bybee, 46, was charged Monday evening with fraud - impersonation: using/possessing ID of another person without consent and access to a computer/electronic device without authority.

During the investigation of Bybee's actions, detectives found an email containing suicidal implications was delivered to the 79-year-old victim’s primary care doctor from the victim’s email address as if it came from her, on Dec. 28. When medical staff received the email, they alerted law enforcement, who responded to the victim’s home and initiated an involuntary commitment for evaluation.

The victim later told detectives she never authored the email, and upon forensic analysis, detectives learned that the email originated from an IP address assigned to Bybee’s residence in Manatee County.

Detectives determined that Bybee wrote the email which ultimately led to the victim’s wrongful involuntary commitment to a treatment facility.

Bybee is already facing multiple charges including attempted murder, exploitation of the elderly, forgery, petty theft, two counts of grand theft, burglary of an occupied dwelling and battery on a victim 65 years or older.

He is accused of taking thousands of dollars from the victim, stealing her dog and trying to kill her by filling her house with carbon monoxide.

He is being held at the Sarasota County jail.

good work by the detectives finding that the emails were sent from another IP addres.