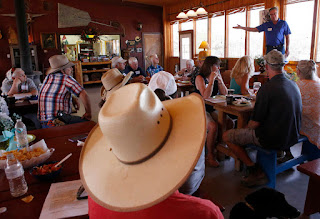 Goodsprings residents rallied Saturday in support of longtime judge Dawn Haviland, who is suspended with pay after state disciplinary investigators slapped her with a laundry list of ethics charges.

“Come out and show your support for our friend and neighbor who is fighting false and malicious charges before the Nevada Judicial Discipline Commission,” read fliers distributed ahead of the afternoon event.

The rally was held at Sandy Valley Ranch near Goodsprings. Attendees were offered free food, beer and wine. They were asked to bring a check to donate to Haviland’s defense fund.

Haviland has served as Goodsprings justice of the peace since 1999. She is accused of sweeping ethics violations that include sealing her then-son-in-law’s criminal records, ordering staff to run background checks on her friend’s boyfriend, and using vulgar language to bully employees.

Haviland, in a 14-page response to the charges, answered in detail to each allegation. She blames the charges on a disgruntled employee whose testimony is cited in the state judicial discipline commission’s formal statement of charges.

A disciplinary hearing is scheduled for August. Haviland faces anything from a private reprimand to removal from office, or the charges could be dismissed.

“I would say that Dawn Haviland is the most respected person in Sandy Valley,” said Haviland’s defense attorney, Al Marquis. “She has done so much for the community without ever having asked for anything in return.”

Marquis said Haviland was instrumental in getting a charter school in Sandy Valley so that students did not need to be bused to and from Las Vegas.

“People in the community just want to rally together … to show that they’re behind her,” Marquis said.

The defense lawyer said roughly 100 people responded that they plan to attend the event.