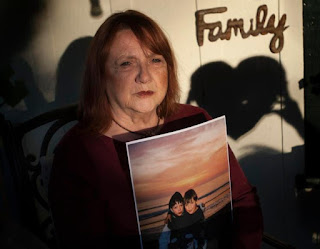 RIVERSIDE – Ryan Morris – the 23-year-old disabled man at the center of a novel and bitter battle between his identical twin brother and his husband – was not in court again Tuesday even as a judge set a February trial date to decide who should be entrusted as Morris’ legal guardian.

Right now, the legal guardian job falls to Morris’ husband, Sean Spicer, 41, of Romoland. But Morris’ biological family is seeking to change that relationship and take over legal responsibility for Morris.

As part of their argument, the family offered into evidence a video clip of the couple’s 2014 wedding. The grooms wore matching tuxedos, with white roses in their lapels, but as the official asked Morris to repeat his vows Morris appeared confused and “did not even understand that he was getting married to another man almost twice his age, thinking he was at a baptism,” according to Morris’ twin, Ronald Moore, in a court filing. Moore and others in his family asked again for the Riverside Public Guardian to be appointed as Morris’ temporary guardian – or “conservator,” in California parlance – while the broader custody battle wends its way through the justice system.

Judge Daniel A. Ottolia made no decision on that question, as both sides are in mediation in hopes of forging an acceptable compromise. They’re to wrap up talks in May and report back to the court June 9.

The case raises questions that go beyond whether identical twins should be raised together or apart, or even how much power the state can wield over families. Can a man with cognitive disabilities so serious that he can’t think abstractly, manage money or care for himself, give informed consent to a marriage and intimate relationship? And does the equation change if that disabled person marries someone of normal intelligence, who then becomes empowered to make the most fundamental life decisions?

Morris suffers from a long list of maladies requiring powerful medications. He has the intellectual capacity of a kindergartner. He can’t think abstractly, manage money or make his own medical decisions, according to court documents.

Spicer has said that he and Morris love each other and that he’s taking good care of Morris. A publicly-appointed attorney said Morris doesn’t want a change in conservators, and fears his biological family is trying to break up his marriage.

The fate of the identical twins has been in court before. The brothers were swept into state custody shortly after their birth in 1994; their mother had a history of mental illness and had not received prenatal care. Ronald was healthy; Ryan was not. Their grandmother sought custody of both boys, but got only Ronald. Ryan was kept in foster care because of his many special needs, which social workers said were beyond his grandmother’s ability to address.

Last month, Judge Thomas Cahraman noted that the unusual case involves complex issues of psychology and sociology, and is fraught with strong emotion. The saga was captured in “Twins Divided,” a three-part series by the Southern California News Group. Readers reacted passionately.

“None of us know how the Ryan Morris case will turn out but it appears to me that once again, a system designed to protect the most innocent and vulnerable citizens of our society has failed,” said Jerry Villanueva, a retired investigator with the San Bernardino County District Attorney’s Office.

“I am terribly sad for the family of Ryan and Ronald, sad for the twins, and angry at those who did so much harm to a family, and to brothers, for years,” said Pat Colin of Orange. “Ryan clearly did not, and does not, have the capacity to enter into a marriage contract, or any other contract, on his own. I pray he gets the help he will need for the rest of his life, with his brother leading the way looking out for him.”

Can't they work together as co-guardians?

Twins have a special bond and they're usually very protective. No doubt Morris' twin is trying to protect him. But in doing so, Morris needs to listen to his twin and then work out an agreement that involves everybody who loves Morris.

This is one sick and perverted story. Now they guardianship mentally ill to make them sex partners. By now nothing should shock our conscience.
I just went to Noah's Ark in Kentucky. It reminded me.... does anybody remember what was going on when God sent the flood that wiped out the earth? Or sodom and gomorrah? Or the fall of Israel and Judah when they were captured by the Babylonians? etc etc etc...............
You'd think by now the gov't branches could serve us with human respect and equal rights for all but I swear they are worse than the tyrants in the Bible. I'm so glad I know the way home where my loved ones are.
Rosanna
http://eldermurderabuseandexploitation.blogspot.com/2014/02/1-elder-murder-abuse-and-exploitation.html