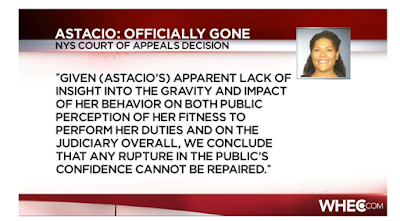 Judge Leticia Astacio is officially no longer a judge.

Tuesday morning, the New York State Court of Appeals, the highest court in the state, denied Astacio's appeal to remain a judge.

The decision was unanimous which means all seven justices felt Judge Astacio should be removed as a judge.

Judge Astacio has been officially suspended with pay since April. Rochester City Court judges make $187,200. Astacio has not heard a single case in a courtroom since her DWI arrest in February 2016.

The Court of Appeals heard Astacio's case in September because she appealed the ruling of the New York State Commission on Judicial Conduct which decided she should be removed from the bench. The Commission's decision came down in the spring after a lengthy, confidential investigation into Judge Astacio.

On April 25, the Commission decided Astacio should be removed because she was convicted of DWI in 2016, tried to use her position as a judge to get out of trouble and violated the terms of her DWI sentence at least twice.

The Commission also decided to remove Astacio based on several instances that happened while she was hearing cases in Rochester City Court.

At a news conference in April, the administrator of the Commission, Robert Tembeckjian, outlined the charges against Judge Astacio.

Charge 2: She used her office as a judge at the time of her arrest "in an attempt to evade the consequences of her arrest," Tembeckjian said.

Charge 4: The fact that she arraigned a former client when she was a judge, and said, "I totally love him. I'm so sad he's in jail right now."

Charge 5: She made undignified comments in four cases as a judge, including one about a victim in a sex abuse case, "repeating a remark made by an attorney that the alleged victim had 'buyer's remorse.'" Tembeckjian said. "And later saying she thought it was 'freakin' hilarious.'"

Tembeckjian also accused Astacio of telling court deputies to physically harm an unruly defendant. "For example," Tembeckjian said. "Telling officers they should tase or 'shoot' or 'punch' an allegedly (inaudible) defendant in the 'face.'"

Astacio is facing a felony gun charge. She was indicted Sept. 11 on the charge of attempted criminal purchase or disposal of a weapon.

Just prior to the Commission's decision to remove her as a judge, Astacio was arrested for trying to buy a shotgun at several Dick's Sporting Goods stores.

As per New York State law, a conviction of a felony automatically leads to disbarment, which is the removal of a lawyer from a bar association or the practice of law.

"For more than 2.5 years, one matter has dominated much of the public’s attention and conversation regarding our court system. During this time, hundreds of judges and staff have come to work each day, ready to deliver justice in thousands of cases involving many of the most challenging issues facing our neighborhoods, schools and businesses.

This unfortunate distraction has not hindered the critically important work done on a daily basis, by the highly competent and caring judges, and dedicated court staff serving the people of this community.

We are grateful for the honor to serve the Judiciary, and we invite the public to continue their interest in the courts and focus upon the extraordinary work done in our courthouses every day- upholding the law and assuring that justice prevails."

And the money she's been paid for not working is just gone?