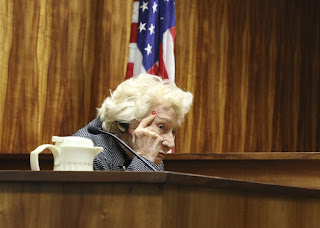 
HONOLULU — A long, bitter legal battle over control of a 94-year-old Native Hawaiian heiress' $215-million fortune raged on Tuesday, with a judge saying her conservatorship should be unlimited but not ruling on who the conservator will be.

It's not clear when Judge R. Mark Browning will rule on who will serve as conservator for Abigail Kawananakoa, considered a princess by some because she's related to the family that ruled the islands before the overthrow of the Hawaiian kingdom in 1893.

Browning "finds that an unlimited conservatorship is appropriate," he said in a written order after hearing arguments Tuesday. His order also directs a court-appointed helper, known as a Kokua Kanawai, to do a "brief investigation into the four proposed conservators," including Kawananakoa's wife.

The Kokua Kanawai must interview the nominated conservators and file a report by the end of the month. Browning set a July 21 hearing.

Kawananakoa inherited her wealth as the great-granddaughter of James Campbell, an Irish businessman who made his fortune as a sugar plantation owner and one of Hawaii's largest landowners.

The legal wrangling dates to 2017, when her longtime lawyer, Jim Wright, argued a stroke left her impaired. Kawananakoa said she's fine and fired Wright. She then married her partner of 20 years, Veronica Gail Worth, who later took her last name.

Native Hawaiians have been closely watching what happens because they are concerned about the fate of a foundation she set up to benefit Hawaiian causes.

"It is our kuleana to ensure Abigail Kawānanakoa's resources — which she intended for the Hawaiian community — aren't hijacked for personal or corporate gain," Oz Stender, interim director of her foundation, said in a statement, using the Hawaiian word for responsibility.

Another judge ruled in March that Kawananakoa needs a conservator because she's unable to manage her property and business affairs. She testified that she doesn't need anyone to handle her estate because she isn't dead yet.

Kawananakoa, who turned 94 in April, listened to Tuesday's hearing by telephone. She didn't speak during the proceeding. Because of the coronavirus pandemic, the judge allowed only a few attorneys to be in the courtroom to avoid a crowded space. Other attorneys, including those representing her foundation, participated by telephone.

She wants a limited conservatorship, said her attorney, Bruce Voss. He said she wants the conservator to be either be her wife, or Stacey Wong, who was trustee of the Eric A. Knudsen Trust, one of Hawaii's largest family estates.

"Fundamentally ... what Ms. Kawananakoa wants is to maintain some control, at least some control, over the things that are most important to her and her life: her people, her care and her horses."

She can make decisions, he said. "She doesn't want anyone ... to take complete control of her life," he said. "She's a proud, smart woman."

She needs is an independent conservator with full control over her finances who can work with a trustee who replaces Wright, said Wright's attorney, Edmund Saffery.

"The issue before the court is simple, should Ms. Kawananakoa be allowed to continue to run her financial affairs over a cliff or should the slate finally be wiped clean with the appointment of a neutral third party conservator beholden to seeing that Ms. Kawananakoa's finances are managed to her best interests," Saffery said.