Eula Mae Powell, 85, in court to fight guardian/conservatorship Jan. 18, subject of controversy since denial of visits by long-time friends

Meanwhile, federal regulations cover the rights of residents in nursing homes in detail, including right of visitation

DETROIT– Elder Eula Mae Powell, 85, won her first day in court by Zoom Jan. 18, in front of Wayne County Probate Judge Judy S. Hartsfield. She presented her petition objecting to guardianship/conservatorship, and emergency motions for s temporary restraining order (TRO) against a nursing home, police, and guardian who barred visits from her friends.

A second amended filing cited violations of federal laws protecting the rights of residents in nursing homes, including the right to visitors of their choice. (Motions linked below story.)

“This is NOT the last stop in my life,” Ms. Powell told VOD during a visit in her cramped, dingy two-person room at The Orchards of Harper Woods last year. All her life, Ms. Powell was independent and active, working at the Dodge Main Plant, teaching in three school systems, and participating in electoral campaigns including the election of Detroit’s first Black Mayor, Coleman Young. She has regular income from her pensions and Social Security.

“I planned to enjoy the retirement that I earned,” she said.

Judge Hartsfield acknowledged Ms. Powell’s request to take her out of court supervision, and meanwhile allow visits from her friends, after reading a report from appointed Guardian Ad Litem (GAL) Steven R. Geller, but did not grant them immediately.

“Ms. Powell does not like losing her independence,” Geller said in part. “She is upset that she is placed in a facility. She is upset she is not allowed to drive and the car and car keys were taken away, she is upset she can no longer go to the bank and have access to her funds. She wants her car back . . .she also wants her money. Lastly, she hates the facility.”

He reported that Ms. Powell DOES want to see her visitors, including Diane Bukowski and others who have been denied access. They have included Agnes Hitchcock, steward of Call ‘Em Out, and Rev. Jerome Poole. Hitchcock attended the hearing on Zoom, and reiterated her desire to visit.

Geller, however, claimed in his report that a guardian has the right to determine who can and cannot visit. He said a guardian must approve visits from Bukowski and others who previously attempted to visit.

The rights of guardians and conservators are currently subject to much debate nationally, with many states enacting progressive legislation to protect the rights of the people UNDER guardianship and conservatorship. It is expected that four bills enacting reforms will be re-visited in Michigan’s newly-constituted legislature this year. (See Channel 7 report at top of story.)

Geller did cite 700.5306a Rights of individual for whom guardian is sought or appointed, in his report, but did not address whether it has been applied in Ms. Powell’s case. The provisions in the box at left were not carried out.

Judge Hartsfield ordered that an “independent” guardian be appointed, as Ms. Powell’s niece Karen Sue Herbert agreed to withdraw from that position. She indicated the guardian would come from Michigan Guardianship Services. It is not known if it is connected to the Michigan Guardianship Association exposed in Channel 7’s report above.  She also ordered a review by an “independent” medical examiner before deciding on Ms. Powell’s request to terminate the guardianship/conservatorship.

Judge Hartsfield ordered Tonia Kimbrough, a social worker from The Orchards at Harper Woods, to report back to Geller in one week regarding setting up “supervised” visits. During the hearing, Kimbrough was inconclusive about whether such visits could be held.

No one representing the Orchards at Harper Woods appeared during the hearing to answer the request for a TRO due to the visit denials, despite having their top officials, including Mark Fuchs, Agent, and Tom Beauvais, Administrator served with a notice.

Bukowski brought Judge Hartsfield’s attention to federal regulations governing the rights of nursing home residents to visits from individuals of their choice, and posting of a home’s policies and regulations including policies on visitation. The following filing is currently included on Ms. Powell’ probate court docket. See: http://voiceofdetroit.net/wp-content/uploads/EULA-MAE-POWELL-Second-Addendum-to-Petition-for-TRO-Petition-v-Guardian-Conservator-Appt-3.pdf.

Among the rights cited in federal law: 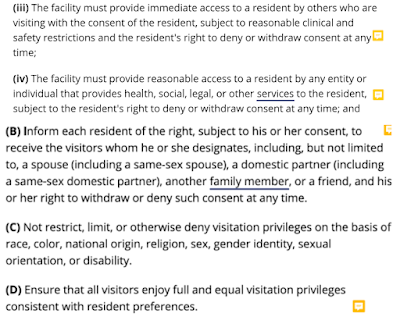 Nursing homes must also have written policies and procedures regarding visitation rights. During attempts to visit by Bukowski and others, copies of such policies were requested, but the requests were ignored. Those denying the visits refused to identify themselves, but claimed Ms. Powell’s guardian did not want them visiting.