A lot of people take talking and being able to express themselves and their feelings for granted. For those with dementia or Alzheimer’s, this can become very challenging and sometimes impossible.

Jim Loane, of Las Vegas, has Lewy body dementia, and things as simple as communicating does not come easy for him.

Although everyday life for him can be hard at times, his wife, Linda, helps him along the way. She always knows what he is trying to say and can help put together the sentences for him to help others understand him.

The couple has been married for more than 40 years, and together they have raised three children and grandchildren. They have always been very happy, but life has become a struggle while dealing with Jim’s dementia. 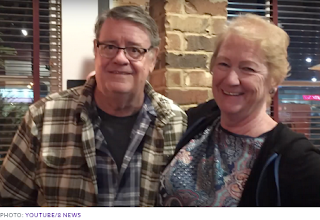 Jim began going to the Lou Ruvo Center for Brain Health to help him through his journey with dementia. He also began weekly music therapy, which has helped him express himself better.

Jim knows that he wouldn’t make it through each day without Linda, who is also his caregiver. He decided to thank her for all of her love and support in a very special way. 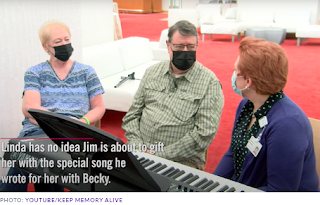 “I was sitting home one day and I thought about Linda and what she does for me and I started writing words, not even thinking it would turn into a song,” he told 8 News Now.

Jim practiced the song for months with his therapist, Becky Wellman, and eventually sang it to Linda on her birthday. 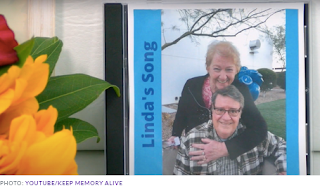 “This was just the man that I married 46 years ago that really had that kind of caring compassion that I know it’s in there, but I don’t always see it and it was nice to see it. It was nice to have him back for that amount of time,” she said.

Hear their story in the video below:

Full Article & Source:
Man With Dementia Gifts His Wife A Song To Thank Her For Her Love & Sacrifices