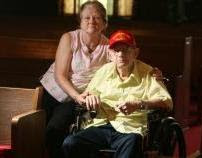 More than a year after the retired Baytown refinery worker died, a showdown still looms in the costly court fight that pits Perry "Bit" Whatley's widow against the dead man's former guardians and the Harris County probate judge who appointed them.

Two attorneys appointed by Probate Judge Mike Wood to represent Whatley during his final years — as well as the judge himself — could face trial in June in a civil lawsuit.

The suit alleges Whatley's guardianship was improperly handled and lawyers should not have been allowed by Wood to manage Whatley's life or his savings.

At stake are hundreds of thousands in court-ordered legal fees and living expenses that consumed much of Whatley's $2 million nest egg, which he built over a lifetime of investments, primarily in his former employer, oil giant Exxon Mobil Corp.

As the litigation drags on beyond Whatley's death, the case remains a cause celebre among critics who allege Texas probate courts are being misused and abused at the expense of the elderly and infirm.
Full Article and Source:
Possible trial pits widow against her spouse's former guardians

The Whatley case, first reported by the Houston Chronicle last year, has been fraught with accusations of financial greed.