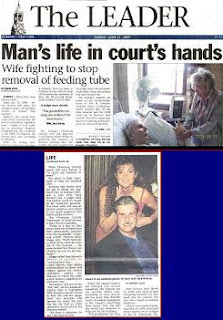 What does Gary Harvey want? Since Jan. 21, 2006 -- the day Harvey fell down his basement steps -- he has been unable to answer that question.

Harvey’s fall caused traumatic brain injuries that left him in a persistent, vegetative state -- unable to talk, walk, eat or otherwise function independently. His condition is not likely to improve, his doctors have said, according to affidavits.

With no living will, Harvey’s wishes are not clearly defined. Does he want to continue living with the help of life-sustaining machines, or does the 58-year-old Horseheads resident want to die?
A judge must decide.

On Tuesday, Chemung County will ask Supreme Court Justice Judith O’Shea to authorize the removal of Harvey’s feeding tube. The county will also request that the judge issue a do-not-resuscitate order. Those two actions will end Harvey’s life.

The county’s requests are based on the recommendations of the St. Joseph’s Hospital Ethics Committee, which decided May 29 the tube removal and the DNR order are in Harvey’s best interest. The ethics board says Harvey is suffering and has little to no chance of recovery.

What Chemung County wants, said Sara Harvey, is “to starve my husband to death.” She plans to fight vigorously to keep her husband alive.

However, Sara Harvey does not get to decide her husband’s fate. In February 2007, just a year after Gary Harvey’s fall, a judge ruled Sara Harvey could no longer be her husband’s guardian. The court ruled she was an abusive guardian who failed to use good judgment and follow medical advice.

Sara Harvey claims she was sandbagged at her guardianship hearing in 2007. She said the hearing went on without her having use of a lawyer.

Sara Harvey is the closest person to Gary Harvey. She above all would know his wishes.

The court should listen to Sara Harvey - her husband's advocate.

It appears that Gary Harvey must be costing the county and so the county wants to get rid of the expense.

We live in a throw away society. Sadly, disabled people are considered expendable.

Where's the honor and respect for life?

I would be interested in knowing who is on the ethics committee and why the committee decided that now -- three years after the accident, that Gary Harvey is suffering. Could it be that their statements fit the County's agenda?

I am sick and tired of bureaucracy playing God.

Gary Harvey will pass on when God calls him. It is "our" duty to take care of him until that time comes.

Let him go home with his wife.

This case is indicative of the future of all of us. We are discarded upon becoming a noncontributor after a full life.

Sara Harvey knows what is best for her husband Gary. The power control freaks at the county level just will not give up on this life and death battle - they must win, win, win at all costs.

This sad case needs to be a lesson to everyone, life can change, just like that and strangers can and will take over your life and everything you own, just like that.

Watch your backs folks we could be reading about .... you.

Gary Harvey probably wants what most people want -- to live. We all have that basic survival right.

For sure one thing Gary Harvey doesn't want is to be tortured to death. Death by starvation and dehydration is torture.

If we're going to kill people because we feel they have no worth, then why not just give them a shot and send them on their way? Do we feel we're more civilized because we don't directly execute them in this manner?

Withholding food and water is direct execution. And it's a painful death.

Gary Harvey deserves to live --- free of Chemung County and the nursing home.

I can easily see that Sara Harvey was likely sandbagged - just like she says.

They'll trample over anyone to get to the money. And now that they have Gary Harvey's money, he's not useful to them anymore.

I would not want my life in the hands of strangers.

I can't imagine anything that would be much scarier than that.

Gary Harvey belongs at home with his wife. This is cruel punishment. This must STOP!

It is a violation of rights to deprive a person of counsel when they wish to be represented. The matter should have been adjourned.

The wife was sandbagged, for sure!

When people in "the system" have ulterior motives, the person who should be the guardian is always accused of abuse. Obviously, Gary Harvey would want his wife to make decisions for him.

I have known Gary and Sarah for a long time.How do politicians know what Gary wants?
I know that Gary is a fighter,and he would never give up. Let him be with his loved ones. He can't say it himself,but we who know him can.

I think you said it well, liveadream!