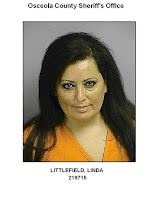 A disbarred Kissimmee lawyer was sentenced Friday to two years in prison for bilking elderly people out of their life savings.

Linda Vasquez, formerly known as Linda Littlefield, pleaded no contest in May to engaging in a scheme to defraud of $20,000 or more. The state dropped 11 counts of fraudulent use of personal-identification information.

Vasquez, 40, also was ordered to pay some restitution, although the amount was not available.

Vasquez's ex-husband, Ross Littlefield, 47, pleaded no contest in November to one count of fraudulent use of a credit card. The state dropped 10 other fraud charges and one count of scheme to defraud. His sentencing is scheduled for Feb. 24.

Several lawsuits are pending against the former couple, a pooled trust they controlled, foundations that administered the trust and Medicaid Benefits Experts, a company Littlefield established last year in Tampa after her arrest.

An attorney for some of the plaintiffs said hundreds of thousands of trust money has vanished.

Yet another lawyer takes a trip up the river!

It's so easy for lawyers to steal and most of them get by with it.

I'm glad there are also lawsuits in the works.