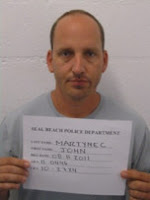 John Wesley Martynec, 36, has denied stealing $302,000 from four men by promising to flip houses for them at a profit. According to prosecutors, he kept the money instead of investing it and produced fake, property records, investment summaries and tax forms to trick his clients.

One victim realized some of the documentation Martynec was providing him was fake, according to prosecutors. Seal Beach police conducted an eight-month investigation into the case.

Martynec has pleaded not guilty to eight felony counts each of grand theft and selling securities in issuer transaction without qualification, six felony counts each of untrue statements in connection with a purchase or sale of securities and the use of a scheme to defraud and five felony counts of financial exploitation of an elder, according to court records. Martynec also faces multiple sentencing enhancements and allegations including loss more than $100,000, property loss higher than $200,000 and aggravated white collar crime more than $100,000.

I hope they put him up for years!