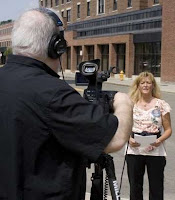 Filmmaker and activist William Windsor is a man on a mission, and that mission brought him to Elmira on Thursday as he seeks to battle what he calls 14 categories of corruption.

“Our challenge is to educate and reach a million-plus people,” said Windsor, who started June 14 on a 143-day trip through all 50 states to work on “Lawless America – The Movie.”

Through the project, he is recording the stories of people who say they are victims of judicial and governmental corruption.

“The name ‘Lawless America’ was developed not to say our country is lawless or that we have a lot of lawless people,” he said.

“It’s to say that we have laws and they aren’t enforced, and we have people who are supposed to enforce the law and they don’t do the right thing, so they’re lawless. The judges change the law at a moment’s notice.”

The subject of his stop in Elmira was Sara Harvey of Horseheads, who claims Chemung County is guilty of guardianship abuse.

Her husband, Gary Harvey, suffered a traumatic brain injury following a heart attack and subsequent fall down a flight of basement stairs in January 2006. He remains in a persistent vegetative state.

She had sought legal guardianship of her husband, but the county Department of Social Services was appointed as his legal guardian indefinitely.

“I want my husband back. I want to expose the corruption of the courts,” Sara Harvey said Thursday. The attorneys involved represent the guardian, the hospital and the county, she said.

“There’s nobody there to protect my husband.”

I'm Sick of the Gary Harvey Case - Time to Move On

Bill Windsor is doing a fantaastic job of exposing corruption.

Go get them Bill...Thanks to you many are coming out of the closet here in Chemung County feeding me information about Kevin Moshier and the dark dirty secrets that this county and their clients hide behind.

What an undertaking. And I am so pleased for Sara Harvey. She did great!

I bet he found plenty of corruption in Chemung County. Bless you, Mrs. Harvey.

Awareness, exposure, public pressure and outrage can make things happen change business as usual. Everytime I look at my husband I think of Gary Harvey alone in his room forced to live by the orders of Chumung County.

Appreciation and gratitude to Bill Windsor for his hard work, sacrifices and efforts taking Lawless America to the people.

Sara, that is great publicity for your just cause to bring your hus band home. Only you should be guardian for your own much loved husband. God bless you, Mary Waddell

Most excellent video...I only wish that something similar could be produced to reveal the disfunctional probate court system in Cook County Illinois. Lucius Verenus, ProbateSharks.com

My physically healthy, 76 yr. old mother was domiciled and resided in Pennsylvania with Advance Directives in place when she took a trip to Florida with her other daughter, my sister.

It has been 5 yrs now and she has never returned. WHY???

Because she fell prey to Officer's of the Volusia County Florida Court including Professional Guardian, Jetta L. Getty owner of Young at Heart Elderly Services in Port Orange FL.

Mother's approx. $470,000.00 estate was converted into legal fees, guardian fees, rent and drug charges among other plunder in less than 5 years. Based on documents Getty filed in Volusia County Court, it appears our mother is now supported by the the Florida tax payers regardless of the documented FACTS that mother was a PA domicile, she had a beautiful home to live in PA and she wanted to return home.

Not one of the Officers of that FL Court involved in this case and being paid from mother's estate, every told the Court mother was just visiting! Couldn't make that kind of money telling the whole truth could they??

Currently Jetta Getty has our mother in an undisclosed location refusing to tell us where she is.

I am so glad to see a bright light shining on the Harvey case. They should have recognized Sara will never give up. She loves Gary and she will protect him from them, not matter what dirty tricks they have up their sleeves. If they had any sense at all, they would have given him up and let her take him home.

Lawless America will be in the Chicago area August 3 - 5.

What amazes me is that the abuser professional guardians, conservators, trustees, hospitals, doctors, Human Services, county attorneys, caregivers, court visitors and all their lawyers, and their judges don't give an inch, no matter what is presented, showing them and the country that what they are doing is not "protection" but life-threatening abuse, and no matter what appears in the News.
They don't seem to fear law enforcement at all. It is not so hard to understand since they are law enforcement. What a minute, what is wrong with this picture, law enforcement breaking the laws and citizen money disappearing. What a minute, this does not make sense. This simply cannot happen in America. So let's not believe it is. Let's keep planning for our old age, saving our money, assured the government will protect us, and think happy thoughts, find our happy place and stay there. And not see, hear or listen to anything that cannot happen in America.

right on rudy once they are dug in they won't budge to proctec and cover their *** this is no different than wrongfully incarcerated prisoners who are freed via the innocence projects anyone have a total on those that were finally set free? we are humans we make mistakes but it takes a real man or woman to admit hey we were wrong we are sorry now that would be a moment to remember