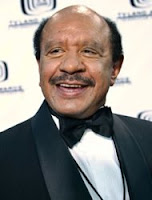 Sherman Hemsley died on July 24 from lung cancer, but the late television star has still not been buried due to a legal battle over his estate and his final resting place.

Hemsley, best known for his 11 seasons on the CBS sitcom "The Jeffersons," left behind an estate of approximately $50,000. He was not married and had no children. According to Fox News, Hemsley left his estate to Flora Enchinton Bernal, his "self-proclaimed business partner and live-in best friend." There is a will attesting to this. However, a man named Richard Thornton came forward after Hemsley's death, claiming to be his brother. Thornton filed a civil lawsuit calling into question the will.

I just bet the lawyers are getting rich...