Andrea Peterman will spend the next decade under the supervision of law enforcement officers who used to call her “your Honor” and “judge.” 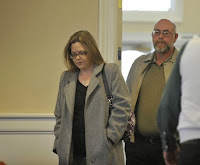 Peterman, who had served as both Crawford County’s chief magistrate judge and Probate Court clerk, was sentenced Monday morning to serve 160 to 180 days in a state detention center, with the remainder of her 10-year sentence on probation.

In a plea deal, Peterman agreed to plead guilty to a count of fiduciary theft from Crawford County Probate Court and a count of violating her oath of office as the county’s elected chief magistrate judge.

She pleaded guilty in a courtroom with many co-workers in attendance. On her way in to plead guilty, she exchanged hugs with a female deputy.

Peterman responded with a firm voice to questions from Moulton about her understanding of the plea agreement, but she said nothing else. Her attorney, Michael Chidester, said Peterman took his advice about her financial problems and wishes she had done so sooner.

“She’s truly remorseful for what has occurred,” Chidester told the judge.

There have been a rash of lawyers and conservators caught stealing. And now judges. This makes it quite evident that judges and lawyers must be monitored as well as conservators.

I am becoming too cynical. When someone is remorseful, I have a hard time believing it's really remorse but instead it's sorry he/she got caught.

Bad judges are slick enough to rarely get caught!