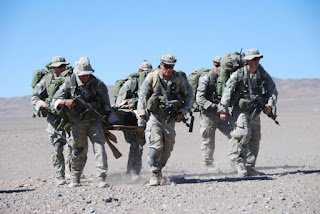 WASHINGTON, August 19, 2016 – A former Army Ranger says he was forced into guardianship by his overbearing parents, assisted by the Veterans Administration, despite being mentally fit and able to care for himself.

His parents, Gail and Roger Patterson, believe the accident left him mentally unable to care for himself.

After his divorce in 2011, Patterson moved back to Erie, Pennsylvania, where his parents live. His mother, an employee the Erie VA Medical Center, then petitioned to have Patterson deemed incompetent and put into guardianship.

An initial report done by the VA found Patterson to be competent.

However, his parents were not deterred. Gail Patterson continued her efforts and reached out to the VA fiduciary Hub, the agency within the VA that handles guardianship matters.

The Erie VA Medical Center issued this statement: “The health and well being of our veterans is our number one priority. We take these issues very seriously and we will continue to follow up with the veteran directly to address his concerns. Out of respect for patient privacy, we are not able to get into specifics of the case.”

There are others who believe Gail Patterson’s employment did create a conflict.

Kristen Davis is a veteran herself and a friend of Patterson’s told CDN that Patterson’s mother’s role at the Erie VAMC was critical in creating a conflict of interest. She said, “Martin Patterson was deemed incompetent by VA Field Examiner Carla Amendola in March 2011 at the request of Gail Patterson. They are coworkers and have a personal history. The VA Fiduciary Hub was aware Gail Patterson is an Erie VAMC employee, as evidenced by her own email communication about the investigation into Martin’s VA funds being misused by Laura Eaton. Laura Eaton was recommended by Carla Amendola as a VA Fiduciary.”

A fiduciary Hub appointed Laura Eaton, who runs a local nonprofit, to be Patterson’s VA fiduciary.

Eaton is no stranger to controversy; in 2011 she was indicted for theft,though the charges were eventually dropped.

Eaton did not respond to a voicemail request for comment.

Judge Dimotrovich, after hearing the pleas of Patterson’s parents and Eaton, placed Patterson in temporary guardianship, and Eaton was assigned to be his guardian.

Judge Dimotrovich did not respond to a call at her chambers for comment.
Patterson has remained in guardianship even though the VA has found him competent. Here’s part of a letter to his mother, “On October 20, 2014, a letter went out stating that your son, Martin J Patterson was found by our Behavioral Health Clinic to have decision making capability.”

Throughout the process, Patterson’s parents have argued that their son is not able to make “life decisions” because of damage from the lightning strike. However, neither Patterson’s parents nor Eaton has any expertise in brain injuries. They have never called a neurologist to testify regarding the case.

Patterson said that though he technically maintains his freedom, effectively he’s at the mercy of his guardian.

“Anything which needs a signature needs her approval,” Patterson said.

He said he can’t get his own apartment because his monthly allowance Is too small, and he can’t get work since no one will hire someone deemed incapacitated.

Patterson currently lives in a house on his parents’ property.

In a statement, the Indianapolis Fiduciary Hub suggested this was all for Patterson’s benefit, “VA has the honor of providing a broad range of benefits to eligible Veterans, and has a statutory requirement to protect the VA funds of Veterans who due to Injury or disease are unable to manage their financial affairs.”

Rather than managing his finances, Patterson said, the VA has stood by while nearly $100,000 of his funds was misused by his parents, ex-wife and Eaton.

See how easy it is to use guardianship to financially exploit or control another person.

Great article! It makes me so mad to see our Veterans treated badly and sadly there aren't many of them who get good publicity like this.

This is so wrong!

Any harm to Veterans should bring public outrage.

ONCE THE MACHINE STARTS CHURNING, THERE IS NO WAY OUT.