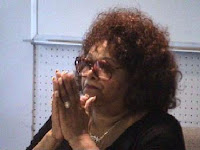 Now this is very different, quite often we are so accustomed to writing stories about sad, once prominent radio and music industry legends, who ran through their money and ended up with nothing. Nevertheless, this case speaks volumes for those who DID plan ahead, SAVED money and STILL end up broke.

Over the weekend, I read a heart-wrenching story about Philly radio legend Mary Mason, who is was living out her last days in a nursing home … broke or at least “cash poor.”

Mason, was once a very prominent figure and black talk radio host in Philly working on the air for over 40 years on the AM frequency as a political pundit, community supporter, an& advocate as well as disciplinarian for the black community. She is now sitting in a wheelchair, leaning to the side, without the ability to speak or remember anything and declining.

During her heyday, she was wise enough to leverage her assets into real estate and other investments. She sold time for the station and hosted many events and was a board member for many committee organizations to earn extra money. Without question, Mason was wisely planning for her retirement.
Unfortunately, perfect planning can still go awry.

When she left radio and 2010, she had $1.5 million in assets. She left her estate to her son C. Steven Turner II, and allowed him to take over her care in the event that she could not take care of herself.

He was alarmed at Mason’s decline and strange behavior and immediately went to work to help with his mother after her diagnosis. She was diagnosed with Dementia which quickly progressed to Alzheimer’s the same year she left radio, 2010. Initially, Mason’s son was doing well with her care until his untimely death at the age of 62 in 2012. By that time, Mason was declining rapidly in a nursing home. All care along with her finances then transferred to her only living recorded relative, her 32-year-old grandson Steven Turner IV who was initially, making payments to the nursing home of an estimated $7000 per month, then suddenly the payments ceased.

Montgomery County Orphans’ Court appointed financial guardianship for Mason to attorney David A. Jaskowiak, Esq. who then filed an emergency petition, seeking the return to Mason’s estate of an estimated $1.5 million from Turner but court documents showed Turner had already written checks in the amounts of $100,000, $150,000, and $550,000. As this would indicate there still may be an approximate $700,000 left from Mason’s assets, the acquisition may not be quick enough to sustain her stay at the nursing home while on her deathbed. She is facing eviction for nonpayment.

Another very sad case and I hope the eviction is turned around for her.

When the money is stolen, it's almost immediately gone. And there's no getting it back. Now she's in guardianship. How is that going to help her?