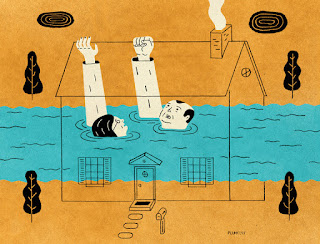 It was a modest house, a two-bedroom ranch in Arlington, Mass. Jerri and Richard Newman had to stretch to buy it for $169,000 in 1996, but with his job at Boston’s Museum of Fine Arts and her freelance editing, they figured they could swing it.

They took out a 30-year, fixed-rate mortgage. But their son developed mental health disabilities, including a bipolar disorder. To pay for his care, and help compensate for Ms. Newman’s interrupted career, the Newmans refinanced four times and took out a home-equity loan.

In an earlier era, the Newmans — he’s 65; she’s 62 — might now be contemplating retirement in a paid-for home. Instead, they’ve amassed so much mortgage debt, about $375,000, that they’re reluctantly considering selling. “We tried for years to catch up,” Ms. Newman said.

“The norm for a long time was, if you bought a house at 35 and didn’t refinance, you’d be done paying for it by retirement,” said Geoffrey Sanzenbacher, a research economist at the Center for Retirement Research at Boston College.


Amid the continuing fallout from the housing boom and bust, however, a growing proportion of older homeowners now carries mortgage debt. And the average amount keeps rising, according to two recent studies, which may portend lower standards of living for many retirees.

More than three-quarters of Americans over 65 remain homeowners despite housing market gyrations. Those houses usually represent their greatest single asset.

But often there’s little equity left, even as prices have largely recovered, because so many older homeowners have borrowed against their homes.

As housing values rose more than 60 percent nationally between 2000 and 2006, homeowners like the Newmans (more than younger ones) refinanced and took out cash, or signed up for home equity loans or lines of credit.

The proportion of homeowners over 55 with housing debt has climbed, the Boston College group recently reported. Dr. Sanzenbacher provided the numbers: 50 percent still had mortgages, home equity loans or lines of credit in 2013, compared with 38 percent in 1998.

An Urban Institute study published this month, based on data from the national Health and Retirement Study, found a similar pattern among homeowners over 65. The proportion with housing debt rose to 35 percent in 2012 from 23.9 percent in 1998.

Medical bills are often the culprit for this terrible dept.