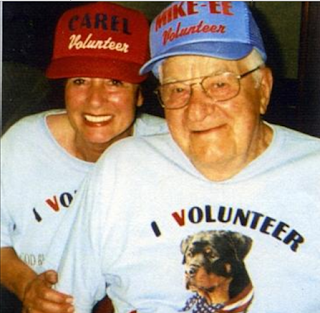 PROVIDENCE, R.I. — The state Supreme Court has dismissed a lawsuit brought against the Coventry Police Department by a Warwick woman who has repeatedly been accused of exploiting elderly men — most recently an aging veteran diagnosed with dementia.

The high court upheld a ruling by Superior Court Judge Bennett Gallo dismissing a suit brought by Carel Callahan Bainum, a longtime Warwick resident who ran for mayor in 2014. Bainum had accused the Coventry police of maliciously prosecuting her for trespassing when she visited an elderly man with dementia at the Coventry Health and Rehabilitation Center while donning a blond wig to disguise herself.

The case stems from Bainum’s relationship with Michael Koczan, a World War II Army Air Corps veteran who died in in 2013 at age 96. Bainum was visiting Koczan in the center’s secure dementia ward on Oct. 16, 2009, when Coventry Officer Ryan Desisto asked her to leave, at the center’s request. She was told, too, that Koczan’s daughter, Kristin Wild, was seeking to halt all Bainum’s visits to her father.

A trial was held in Superior Court in 2010 in which Bainum, Warwick’s onetime animal-control supervisor, represented herself. A jury, in 55 minutes, convicted her of the misdemeanor count. Judge Edward C. Clifton gave her a one-year suspended sentence with probation and ordered her not to contact Koczan.

Bainum then filed suit, accusing the department and individual officers of malicious acts, altering police reports and perjury. She charged that they had colluded and conspired against her.

She told The Providence Journal prior to her trespass trial that Koczan, who suffered severe cognitive impairment and a host of physical problems, was being kept “a prisoner” in the Coventry nursing center. She claimed to be Koczan’s friend and said she wanted to call attention to his plight.

Koczan told nursing home staff that he wanted to leave, marry Bainum and “live happily ever after.”

H. Reed Cosper, who was the state’s mental-health advocate at the time, alleged in a prior guardianship petition that Bainum was exploiting Koczan and had a history of “financial and emotional exploitation of elderly men, particularly veterans.”

Bainum vehemently denied that she was an elder predator.

Gallo in 2015 dismissed Bainum’s claims as meritless. The judge found that Bainum’s malicious prosecution allegation hinged on whether the police had probable cause to prosecute her for trespass.

Gallo found that her conviction “conclusively establishe[d]” the required probable cause.

Bainum, whose phone number at Sunnyside Drive was disconnected, could not be reached for comment. But she has been the subject of much litigation in Rhode Island courts.

Providence lawyer, David J. Strachman, sued Bainum on behalf of Vartan Baligian, who loaned her $120,000 in 2002. In 2007, the year the loan was due, it was rewritten to become an 11-year-interest-free note. Baligian died in July 2008. A judge has ruled that Bainum had “hoodwinked” Baligian into signing the new loan documents and has blocked her from disposing of assets until the civil-fraud case is tried.

Strachman said the $179,207 judgment awarded in that case has not been paid. Of the Koczan ruling, Strachman said, “It’s a disturbing involvement with yet another extremely old senior citizen.”