The Invisibility of Being Old, Disabled or Both 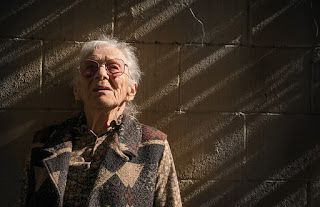 When you’re an older person in a wheelchair or walking with a cane, people treat you differently. Sure, some might be quicker to open doors for you, but most of the behavioral reactions aren’t positive ones. The combination of being old and disabled causes what many refer to as “invisibility.”

Frank Bruni, an op-ed columnist for The New York Times, explored this idea in a recent column through the lens of 82-year-old Nancy Root, a woman with post-polio syndrome Bruni met while giving a lecture on a cruise. Root taught Bruni how it felt to be seen as invisible because of her age and perceived ability.

“People looked over her, around her, through her. They withdrew,” Bruni wrote.

An Intersection of -Isms


The concept of invisible older people — specifically older women — is not new. Novelist and screenwriter Ayelet Waldman discussed with us the invisibility of turning 50 as a woman.

“I had no idea that as soon as I got to his age, to be a 50-year-old woman, the sexism gets completely complicated by this idea that not only are you incompetent as a woman, but you’re incompetent because you’ve reached your senescence! Or something,” Waldman told Next Avenue. “I really do feel like they don’t even see you.”

The intersection of ageism and sexism provides a uniquely taxing form of oppression. Add a layer of ableism to that and you start to see exactly what Root describes experiencing.


Root had polio as a 2-year-old in the late 1930s; now, post-polio syndrome — which many childhood survivors of the disease develop — degrades her muscles, forcing her to use a cane and a wheelchair. As she’s aged and the condition has worsened, Root has noticed that people no longer look at her the same. Instead, she’s erased.

“Doctors’ offices are the worst,” she told Bruni, recalling how people won’t address her directly, but rather speak to whoever is pushing her wheelchair. “I’m not acknowledged. ‘Does this lady have an appointment?’ ‘Does this lady have her medical card?’ They don’t allow this lady to have a brain.”

And it’s not just at doctors’ offices. This extends to nearly every situation — movie theaters, flights, grocery stores, you name it.

“They make dismissive assumptions about people above a certain age or below a certain level of physical competence,” Bruni’s column said. “Or they simply edit those people out of the frame.”

Root told Bruni she thinks strangers worry that she’ll need something from them, or perhaps they see their fears about being older manifested in her and can’t bear to face them.

Harkening back to 2016 Influencer in Aging E. Percil Stanford’s story advocating for the humanization and value of older people, we as a society must do “everything possible to embrace the inclusion of older people in every aspect of life.”

Only then will people like Nancy Root start to see change.

Full Article & Source:
The Invisibility of Being Old, Disabled or Both
Posted by NASGA

A person told me one time that she went to Macy's with her friend. Her friend shoplifted and this person was shocked and appalled and couldn't wait to get out of Macy's. When they got out of the building she admonished her friend who said, "Why not? I'm old and that means I'm invisible."

This makes me so sad. I disagree with old people being invisible. I think they're more just in the way and disabled people are invisible. What a sad statement about society.