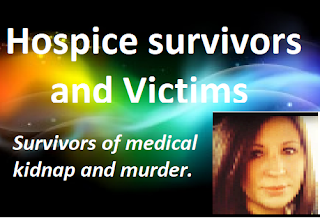 Dennis Andrew Ball’s hardship began with his father more than twelve years ago. Dennis was a caregiver for twelve years of his life; Dennis is going to share with us how is father and mother were murdered in the medical system. Since living through this nightmare, Dennis has dedicated his life to change for our system. He is an author of ten books with four more to release soon. He also believes that to change the system we should change it from within by running for elected positions. We will focus on giving Dennis a voice for what his mother and father had to endure in their last years under a Guardianship.

I just found this blog and I am happy I did because I have a particular interest in hospice abuse. I will listen to the archive of this show.

This was a great show. Everybody should be listening to Marti Oakley on T.S. Radio, especially when it comes to Hospice and Guardianship Abuse. Brilliant!