Lawyer: Incapacitated woman who gave birth not in coma 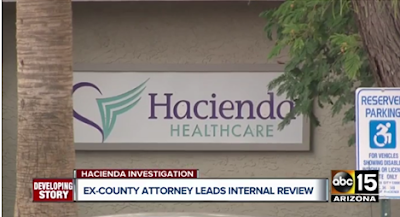 PHOENIX - A lawyer for the family of an incapacitated Arizona woman who gave birth in a long-term care facility said she is not in a coma as previously reported.


The Arizona Republic reported Friday that attorney John Micheaels said the 29-year-old woman has "significant intellectual disabilities" and does not speak but has some ability to move, responds to sounds and is able to make facial gestures.

Phoenix police have said the woman was the victim of a sexual assault and have disclosed little other information.

A Jan. 8 statement by San Carlos Apache Tribe officials said the woman, a tribal member, gave birth while in a coma.

News media outlets have reported that the woman, who has not been publicly identified, was in a vegetative state at the facility where she spent many years.

"The important thing here is that contrary to what's been reported, she is a person, albeit with significant intellectual disabilities. She has feelings and is capable of responding to people she is familiar with, especially family," Micheaels told the newspaper.

He responded to a request Saturday by The Associated Press for comment by saying in an email that the information reported in the Republic is correct. He did not comment further.

The woman gave birth to a baby boy on Dec. 29 as staff at Hacienda HealthCare frantically called 911 for assistance, telling an operator that they had not known she was pregnant.

Police investigators have been collecting DNA samples from male employees at the facility and any other men who could have had contact with the woman. State regulatory officials have also launched investigations.

The victim and the newborn have reportedly been recovering at a hospital, but no information has been released about their conditions.

The woman's guardian, her mother, described her in a May 29 annual guardian report filed in court as "an incapacitated adult." An attached doctor's report said the woman has a brain disorder, a form of retardation, recurrent pneumonia, paralysis of the limbs, seizure disorder and other conditions.

Hacienda spokesman David Leibowitz told the AP on Saturday that patient privacy laws precluded him from discussing the woman's condition.

The director of the facility has resigned and the company subsequently hired former Maricopa County Attorney Rick Romley to conduct an independent investigation into management procedures and patient safety.

On Friday, Hacienda announced that another female patient had alleged physical abuse by staff members.

Hacienda officials said in a news release that the patient accused a registered nurse and a certified caregiver, both women, of yelling at her and hitting her head and arm.

Hacienda officials said the patient showed no signs of injury or abuse and that the two workers had no history of complaints and denied the allegations. They were placed on administrative leave during an investigation.

Police say they were informed about the complaint but weren't able to corroborate anything.

Imagine - she was completely defenseless and you can bet the sob who raped her had planned it and waited for the right time when no one was around. How many others raped her too?