The reversal came two weeks after they were adopted by Charlie Thrash, 81, a wealthy San Antonio man who in 2017 was found to be mentally incapacitated.

Joe, 27, and Brittany, 25, are the children of Thrash’s girlfriend Laura Martinez, who married him on March 4.

That short-lived union was annulled last week in Bexar Probate Court, where Thrash is under the protection of court-appointed guardians.


Because of his incapacity, Thrash has been under standing court orders to not marry, vote, drive a car or make any important personal decisions, including, apparently adoptions.

On Tuesday, State District Judge David Canales nullified the adoptions that he had approved a week earlier. It came at the request of Thrash’s guardians, who claimed that the adoptions were “a fraud on the court.”

The judge scolded lawyer Phil Ross, who represents Laura Martinez, and was involved in the adoptions, for misleading him and not alerting him to Thrash’s legal status.

“It sounds like a lot of information that would have been helpful to me was not presented,” Canales said.

Barrett Shipp, the lawyer for Thrash’s guardian Mary Werner, said these omissions “completely robbed this court of being able to enter a proper order.”

Ross objected to the motion to void the adoptions even being heard, claiming that Canales lacked jurisdiction and that Thrash should have been present Tuesday at the hearing.

Ross said Thrash had the right to adopt the two Martinez children, despite the standing order from probate court.

Canales saw it otherwise and restored the siblings to their former status.


“The adoptions have been set aside. It starts all over again,” said Laura Cavaretta, a lawyer for Tonya Barina, guardian of Thrash’s estate, worth more than $3 million.

Tharsh, who operated a specialty auto repair shop on West Avenue for decades, has not been seen publicly in two weeks.

On March 6, Werner arrived at his home in Shavano Park with police officers and took him away. She said Thrash is now staying with a relative and doing well.

Laura Martinez, 54, who said she is the sole beneficiary of Thrash’s will, said she loves him and wants him back.

“I have a lot of faith. I have many religious people contacting me and they are not happy about the annulment and the questions about the adoptions,” she said. “The kids love him, that’s why they want to be adopted by him.”

Martinez has denied mistreating or financially exploiting Thrash, whom she says she began dating in August 2012.

Thrash had been married and divorced twice, and did not have children of his own.

A report by a court-appointed investigator, as well as statements by adult protective services officials, painted Thrash as being controlled and manipulated by Martinez and her family.

According to Elaine Damian, investigator for Bexar Probate Court No. 1, Thrash did not want to get married and gets along well with his guardians. She also concluded that Thrash was vulnerable to suggestion and intimidation, and stated the guardianships are necessary. 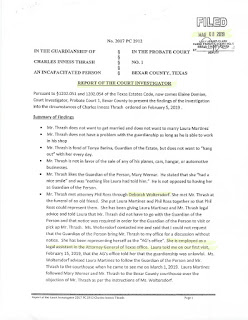 In a lengthy rebuttal to the court investigator’s report, Ross took issue with claims he was being controlled and isolated, and attacked the guardian’s conduct as interfering unnecessarily with Thrash’s personal and business affairs.

“Damian’s report is inadequate, biased and unreliable because it fails to report investigation of important facts including hostile and malicious actions of Barina, guardian of estate, and Werner, guardian of the person,” Ross asserted, going on to list numerous alleged hostile acts. 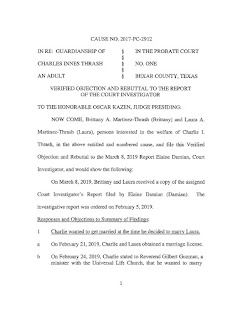 Among them, according to Ross, was Barina’s closing of Thrash’s bank accounts, locking him out of his business, failing to arrange for his financial support and ignoring medical claims that his mental capacity has been restored.

He accused Werner, Thash’s personal guardian, of “conspiring with Shavano Park Police Department … on the pretext of a welfare check to abduct Charlie from his home against this will on March 4, 2019, and facilitating his false imprisonment.”

Werner said she was forced to remove Thrash for his own safety, and because Martinez was uncooperative and manipulative.