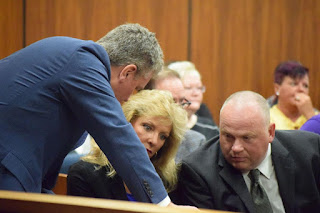 A Clinton Township guardianship and conservatorship company accuses the state Attorney General of being "over-zealous" in trying to intervene in a high-profile Macomb County Probate Court case involving the company.

Caring Hearts Inc., represented by attorney Edward Nahhat, earlier this month filed a response to Attorney General Dana Nessel’s request to intervene in a review of the case involving wards Robert Mitchell and Barbara Delbridge, who were under the guardianship of Caring Hearts Inc.

Nessel questions Judge Kathryn George’s appointment of Caring Hearts, its expenditures and its decision to hire Executive Care to perform care-taking services for the couple who were living in Utica. Both companies are owned by Catherine Kirk, whose husband, Robert, is a partner in a law firm that represented Caring Hearts.

Nahhat also accuses Nessel’s office of making “overbroad” accusations in a politically-motivated effort in seeking to enter the case.

“The Attorney General’s objections … are overbroad, unsubstantiated by detail and inequitable,” Nahhat wrote. “It appears the Attorney General has misapplied this statute (one of the applicable laws) as well, in order to political scapegoat Catherine Kirk, Robert Kirk, and their respective services.

“Clearly, Caring Hearts Michigan In. and its contracted in-home health care provider (Executive Care) and its contracted law firm (Kirk, Huth, Lange and Badalamenti) provided valuable services to the benefit of the wards over a significant period of time, and was appointed by the court (Judge Kathryn George) without petitioning itself to be appointed for these individuals.”

Nahhat wrote that Judge George was aware of the relationship between Caring Hearts and Executive Care when she made the appointment.

Caring Hearts charged more than $250,000 for about six months of care.

The law in question says, the “Court shall not appoint as guard an agency, public or private, that financially benefits from directly providing housing, medical, mental health or social services to the legally incapacitated individual.”

Moody wrote, “The intention behind this provision is to prevent conflicts of interest.”

But Nahhat responds the Attorney General has “misapplied” the law because Caring Hearts or Executive Care have not provided any of those services.

Nahhat also vehemently denies accusations of a conflict of interest due to the arrangement between the Kirks, accusing the Attorney General of a “wildly exaggerated interpretation” of the law “for political purposes.”

Nahhat notes Mitchell and Delbridge received something of value from the Caring Hearts and Executive Care.

He says that typical cases that violate the law involve a guardianship company hiring a family member to manage a ward’s investments.

“Nothing has been hidden in the work provided, and Catherine Kirk never involved her spouse in ‘investment or management transactions,’” he says.

A hearing in the case is set for Jan. 10 in front of circuit court Judge James Biernat Jr., who as chief judge is substituting for George in Probate Court.

Caring Hearts was first appointed as guardian and conservator for Mitchell and Delbridge, who are both over 70, over family members in November 2018.

In May, Mitchell’s daughter, Marcie, and other family members complained their visits were limited and that caregivers installed a 6-foot fence around the property near Hall Road and Van Dyke Avenue that blocked the vision of family members who resided next door. The said the couple were virtual prisoners in their home.

They also raised questions about the guardian and conservator company's spending from the couple's more than $2.5 million in assets.

Caring Hearts and Executive Services in early June withdrew from serving as guardian and conservator.

Moody in the early-September intervention request says George violated the law by making the appointment.