The complaint filed by internationally-renowned law firm, Akin Gump, alleges Judge David Cowan made provably false assertions in open court about Lund having a mental disability - yet when presented with DNA test evidence proving the falsity of his claim, he refused counsel's request to take down the false assertion

"In California, even judges are not above the law," said Lund counsel Lanny J. Davis 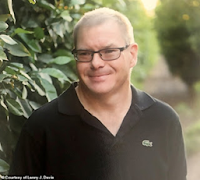 Under state law, such a complaint of disabilities discrimination by a sitting judge and a county Superior Court System must be forwarded to the California Department of Fair Employment and Housing ("DFEH") for investigation and determination. Dario J. Frommer, a partner at the international and renowned law firm Akin Gump, writes in the written complaint to the Chief Justice that if the DFEH finds that Judge Cowan and the Superior Court system engaged in such disabilities discrimination in violation of the Americans with Disabilities and Rehabilitation Acts, even based on a false perception, then that the judge and the court system should be found liable for monetary damages and other sanctions.

Lund's complaint, filed by Frommer on his behalf on July 7 with the California Judicial Council, specifically quotes Judge Cowan's false comments from the bench, in open court, that Lund "may" have Down Syndrome. It was in part based upon that utterly false and discriminatory statement and other baseless findings made by Judge Cowan regarding Lund's lack of mental capacity, that Cowan appointed a "guardian ad litem" – a temporary new lawyer for the probate court proceeding – denying Brad's request for a trial and due process. That resulted, Frommer alleged, in discriminatory action based on a false perception of a disability.


"Do I want to give 200 million dollars, effectively, to someone who may suffer, on some level, from Down Syndrome? The answer is no."

According to the June transcript of the court hearing, Lund's attorney, Sandra Slaton, demanded a public retraction, reminding Judge Cowan that a DNA test precluded the possibility that Lund had Down Syndrome. "It's been proven not true, and even the [trustees] don't allege that anymore," Slaton said. When again asked to withdraw his false statement in light of the dispositive DNA evidence, Judge Cowan responded with one word: "Denied." (June 25, 2019 transcript, p. 21, l. 4).

"Judge Cowan's [false] comment [from the bench] and actions appear to be based on nothing other than pure animus for Mr. Lund on the basis of a perceived disability," Akin Gump's Frommer, former majority leader of the California State Assembly, wrote to the Hon. Tani G. Cantil-Sakauye, Chief Justice of California and Chair of the Judicial Council, based in San Francisco, California. "Judge Cowan was also aware that the Arizona courts had determined that Mr. Lund is competent. Yet, Judge Cowan disregarded this evidence and let his implicit biases lead him to unlawfully strip Mr. Lund of his civil rights and his right to control his own affairs."

Last March, Lund brought a case in U.S. federal court, central district of California, alleging violations of his constitutional rights to due process after Judge Cowan, based on this and other false conclusions that Lund lacked sufficient mental capacity, denied Lund's request for a hearing and due process of law.

"Brad Lund will continue to fight against unjust disabilities discrimination with the Chief Justice and in federal court and prove to the federal court that his due process rights were violated," said Lanny J. Davis, a former White House Special Counsel and co-counsel in the Lund U.S. Civil Rights Act case filed against Judge Cowan and the LA County Superior Court system in federal court last March.

"Mr. Lund recognizes that far too many victims of discrimination, including discrimination based on a false perception, often do not have the resources to file their own cases," Dario Frommer said. "And Mr. Lund is fighting on their behalf as well."

"Mr. Lund believes that not even judges are above laws prohibiting discrimination or can violate the U.S. Constitution, and he is right," Davis added.

See Also:
Lanny Davis, Attorney to Bradford Lund, Grandson of Walt Disney, Joins Arizona Litigation Against Lund's Former Attorney, Jeffrey Shumway Who Is Alleged To Have Charged Lund Over One Million Dollars Only To Secretly Betray Him

Bradford Lund, Walt Disney's Grandson Wants To Have His Day In Court, After California Supreme Court Denies His Petition To Review

A victim of Injustice by Renigade Attorneys said...

Judge David J Cowan said I was meant to be disinherited from my father even though the trust lists me and his grandchildren. End result is that 3 attorneys and a financial adviser got $$$$. The next of kin was an attorney. Extrinsic Fraud and a paid off judge. Read about him on the toning room and Facebook

Grateful people call even Judges on thier wrongs
It's refreshing. Thank You
Lynn Malcom
ncrj.org
My case of false allegations
with DVD. is on there