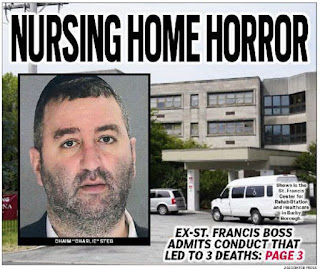 MEDIA COURTHOUSE — The former regional director of operations at St. Francis Center for Rehabilitation and Healthcare in Darby pleaded “no contest” Wednesday to three counts of recklessly endangering another person that state Attorney General Josh Shapiro said resulted in the deaths of three residents in 2017.

Chaim “Charlie” Steg, 40, of 1100 block of Coughlin Street in Lakewood, N.J., is scheduled to be officially sentenced to six to 23 months of electronic home monitoring Oct. 25 before Common Pleas Court Judge Anthony Scanlon.

In the interim, Steg will be placed on home monitoring beginning Wednesday. He will be given credit for time served on the device when he is sentenced in six months, according to the plea agreement worked out by Senior Deputy Attorney General Mark Levenberg, Deputy Attorney General Benjamin McKenna and defense counsel Art Donato.

“No amount of money, no number of criminal charges brought or pled to is going to be enough for the families who missed out on their final years with their loved ones,” said Shapiro at a press conference announcing the plea Wednesday morning. “But I think it’s important to remember this: Every resident here in Delaware County and all across the Commonwealth of Pennsylvania deserves to be safe, they deserve to be treated with respect and with dignity, and they also deserve to be heard when they speak up and they speak out.”

Steg was charged with the three misdemeanor counts by a statewide investigating grand jury that heard testimony from 22 witnesses and reviewed 78 pieces of evidence, according to an affidavit of probable cause for his arrest written by Attorney General’s Office Special Agent Jennifer Nutter. Darby Borough Detective Brian Pitts was co-lead investigator in the case with Nutter.

The investigation was launched in August 2017 after staff at Mercy Fitzgerald Hospital notified Delaware County Services for the Aging of concerns about the poor health conditions of several residents who had been transferred to the hospital. COSA, in turn, notified the A.G.’s Office and Darby Borough Police.

One of those patients, an 87-year-old identified as “B.W.,” died at the hospital Aug. 15, 2017, due to a massive fecal obstruction in her colon and dehydration, according to the affidavit. She was already suffering from a urinary tract infection and sepsis when she came to the hospital, which ultimately caused her death, the affidavit says.

Another 86-year-old identified as “O.G.” died at the hospital Aug. 20, 2017, from septic shock and severe dehydration after suffering from Stage IV pressure ulcers that exposed his tendon and bone, according to the affidavit. There was no evidence O.G. had received any medical treatment for his wounds, the affidavit says. St. Francis staff allegedly ignored concerns from his family, who ultimately were the ones who got him into the hospital Aug. 13, 2017, a week before his death.

The third resident, 87-year-old “L.C.,” developed a severe pressure wound that should have been noticed weeks earlier if properly trained staff were performing routine care, the affidavit says. The wound required debridement at the hospital Aug. 15, 2017, after which L.C. returned to St. Francis. Staff there again failed to properly monitor her, however, and she died Sept. 7, 2017, after developing a bacterial infection in her blood.

A medical expert reviewed each of the patients’ records and determined their deaths were not isolated incidents, but the result of systemic failures within St. Francis, the affidavit says.

The grand jury also determined the injuries and deaths the three residents suffered were avoidable and the result and Steg’s failure to address well-known staffing shortages at the 273-bed facility.

“Despite making multi-million dollar annual profits, Steg … recklessly chose not to adequately invest in adequate staffing and did not adjust other operational factors within his control to mitigate the ongoing staffing crisis,” the affidavit says. “St. Francis was understaffed on a daily basis for months at a time and much of the staff they did have was inexperienced and not sufficiently trained.”

One former administrator told the grand jury that staffing at St. Francis was a “revolving door,” while another former staffing coordinator testified she had complained more than 40 times between December 2016 and April 2017 about staffing shortages, but Steg did nothing about it, according to the affidavit.

Shapiro indicated these are the only charges that will stem from this investigation and declined speaking about any other ongoing investigations his office might be conducting in the wake of the COVID-19 pandemic, which also left many medical facilities and nursing homes short staffed.

The Pennsylvania Department of Health conducted a survey of St. Francis in August 2017 and found widespread and systemic deficiencies, including multiple cases of neglect, according to the affidavit.

St. Francis’ staffing budget called for three direct care hours per resident per day under Steg’s leadership, according to the affidavit, but DOH found 4.1 hours was needed, given the conditions there and the acuity of residents.

The department nearly shut the doors on the facility, but instead declared an “Immediate Jeopardy” situation that Shapiro said barred any new residents from coming in.

Shapiro said two related business entities – “1412 Lansdowne Operating LLC,” which did business as “St. Francis Center for Rehabilitation and Healthcare” and ran the day to day operations of the facility, and “Catholic Facilities Operating LLC,” which paid Steg’s salary – have also agreed to pay a $1.2 million civil settlement as a result of the investigation.

The settlement requires St. Francis to maintain an increased minimum staffing level and undergo an additional year of monitoring to ensure compliance through quarterly audits by the Department of Health – violations of which will extend supervision by another three months for each infraction, Shapiro said.

He added that the businesses have already paid fines of $550,000 to the Centers for Medicaid and Medicare Services and DOH, and will additionally place $600,000 into escrow for the benefit of St. Francis residents. They will also provide $100,000 to the non-profit group Center for Advocacy for the Rights and Interests of the Elderly, Shapiro said.

“It is the law to uphold the obligation to keep residents safe,” said Shapiro. “If a facility cuts staff to the point that they can’t give residents the care they need, we’re going to find out and we’re going to hold them accountable.”

In addition to electronic home monitoring, Steg will have three years of probation and will not be able to staff, manage, own, or operate the nursing, clinical, or medical services of any skilled nursing facility for five years. He will also pay a $15,000 fine and a total of $21,213 in restitution to the families of the victims.