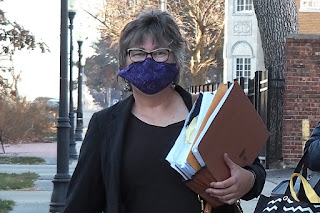 Topeka — A three-attorney panel unanimously recommended the Kansas Supreme Court disbar an attorney for knowingly making false statements to juries during two high-profile trials and for misleading claims about her prosecutorial misconduct to justices of the state’s highest court.

Jacqie Spradling, who more recently worked as an attorney in Bourbon and Allen counties, landed before the disciplinary panel after the Supreme Court overturned the 2012 double-homicide conviction of Dana Chandler in Shawnee County and the Kansas Court of Appeals overturned a 2017 guilty verdict against Jacob Ewing in a sex-crime case in Jackson County. Spradling was lead prosecutor in both cases.

Chandler is awaiting retrial on first-degree murder charges, and Ewing accepted a plea deal in May to avoid another trial.

“Based on the deliberative pattern of serious misconduct and the serious injury that followed, the hearing panel unanimously recommends that the respondent be disbarred,” the report submitted to the Supreme Court said. “From all the evidence presented, it appears that the respondent concluded that Chandler and Ewing were guilty of the crimes charged and she adopted a ‘win-at-all-costs’ approach.”

The report obtained Friday by Kansas Reflector was submitted by panelists John Larson, Darcy Williamson and William Jeter for consideration by the Supreme Court. The panel said the issue wasn’t that Spradling engaged in an isolated incident or made an inconsequential mistake in the heat of trial. The panel said the Iola resident “knowingly and intentionally” engaged in a “deliberative pattern of serious misconduct.”

In addition, the panel determined Spradling’s handling of the two criminal cases “undermines the confidence in the judicial system and caused serious injury to the administration of justice.”

Members of the Supreme Court, who hold final authority in disciplinary cases involving attorneys, will issue a decision based on the panel’s 78-page report.

The state disciplinary administrator’s office in Kansas that investigated complaints about Spradling’s behavior as a prosecutor proposed that her license to practice law be indefinitely suspended. Spradling, however, told the disciplinary panel that she shouldn’t be disciplined at all.

Spradling had been dismissive of allegations of wrongdoing until she testified at the disciplinary panel hearing in December. During that under-oath appearance, she conceded to having “failed in these cases” to uphold the ethical duties of a prosecutor. She begged the hearing panel to accept her assertion that her work as an officer of the court was defined by a “protectiveness, a loyalty and a belief in justice.”

“When these cases were overturned, it was very difficult because I had let the system down. I had let the victims down and I had denied the defendants a fair trial,” Spradling said.

“With regard to the recommendation of the disciplinary panel, I was disappointed,” Hathaway said.

The Supreme Court laid the foundation for advancement of a disciplinary case against Spradling in 2018 when the justices overturned Chandler’s convictions in the Topeka slayings of Mike Sisco, Chandler’s ex-husband, and his fiancee, Karen Harkness. The Supreme Court said Spradling’s conduct in the Chandler case illustrated how a compulsion for courthouse victories could subvert a prosecutor’s duty to guarantee a person’s fair-trial rights.

Supreme Court Justice Dan Biles summed up Spradling’s tactics in the Chandler trial: “Taken as a whole, this prosecution unfortunately illustrates how a desire to win can eclipse the state’s responsibility to safeguard the fundamental constitutional right to a fair trial owed to any defendant facing criminal prosecution in a Kansas courtroom.”

During the Chandler trial in Shawnee County District Court, Spradling falsely told the jury a protection from abuse order was issued against Chandler prior to the 2002 slaying of Sisco and Harkness. There is evidence Sisco requested a mutual temporary restraining order four years before his death while going through the divorce from Chandler.

When Chandler appealed her case, Spradling told Supreme Court justices in a written brief that she believed the more rigorous protection from abuse order had been put in place by a district court. That’s what she had told the Chandler jury and repeated to state disciplinary investigators despite an inability to produce evidence a judge had ever issued that type of restraining order against Chandler.

Spradling testified to the three-person disciplinary panel that she never possessed documentary proof of the protection from abuse order. She said filing of the disciplinary case led her to conduct a fresh attempt to locate such a document. That search was unsuccessful, she said.

“I was wrong. Dead wrong,” Spradling told the panel. “So, for a person who wants to be right, strives to be right, being wrong is embarrassing, humbling.”

Spradling’s reputation as an experienced prosecutor of complex crimes in Johnson and Shawnee counties led officials in Jackson County to hire her as a special prosecutor in the Ewing case. It was a case made difficult because the alleged crimes occurred in a small community and turned on the jury’s conclusions of the credibility of female witnesses.

Spradling convinced a jury in Jackson County that Ewing was guilty of rape, aggravated criminal sodomy and battery. The Holton man was sentenced to 27 years in prison.

In 2019, the Court of Appeals concluded Spradling made a half-dozen errors during the Ewing trial and had offered unsubstantiated claims to the Ewing jury during closing arguments. The case was remanded to Jackson County District Court. Rather than go through a retrial, Ewing agreed in May to a plea deal that would trigger a 10-year sentence for sexual assault.

Full Article & Source:
Panel calls for Kansas attorney to be disbarred for misconduct in high-profile cases
Posted by NASGA