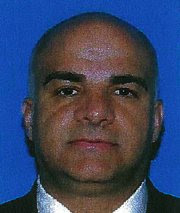 State security officers served a search warrant at the office of a man charged with senior exploitation, as more victims continue to come forward in an investigation of a real estate scam.

Eljawaidi initially was sought for elder exploitation in December 2004. The recent victims say they fell for investments with the real estate developer from 2005 through 2008.

In one case Eljwaidi took $400,000 from a 67-year-old man, who has been diagnosed with several mentally incapacitating conditions. Investigators said that Eljwaidi told the man he would be an equal partner in a commercial real estate venture.

Instead, Eljwaidi used up to $600,000, including the man's money, to live a lavish lifestyle while leaving the elderly man destitute.

With evidence gathered by investigators with the search warrant, Eljwaidi could face new charges including securities fraud, sale of unregistered securities, obtaining money under false pretenses and racketeering.

Eljwaidi's attorney, Steve Wolfson, also a Las Vegas City councilman, said in Justice Court recently that his client was out of the country. However, the Nevada Attorney General's Office said it has information that he is in the United States.

Anyone who knows where to find Eljwaidi or who invested with him or his companies, Babuski LLC and JKG Development, or anyone who believes they may have been a victim, is asked to call the Secretary of State's Office in Las Vegas at 486-2440, or (775) 688-1855 in Carson City.

Thank you for your diligence, NASGA, in posting these alerts.

Now that other victims are coming out, I bet there will be a flood of them.

I hope they get him off the streets!

Jamal Eljawaidi come out, come out from under the muck, the Nevada Attorney General's Office is looking for you.

I hope this low-life crook spends the rest of his life in a state cage.

I hope Jamal Elijawaidi is afraid, he needs to feel fear and cry over the thought of going to prison where he will be a marked jailbird preying on the old folks, which shows he is a sneak and a coward.

Fear and worry would be the beginning of justice.

Sue, I was thinking about the same thing -- wishing him decades of misery. And even with that, he'd be getting off easy!