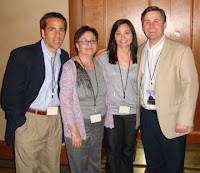 If I could have, I would have gone to the 1st annual "Terri Schiavo Life & Hope Concert." But National Right to Life was more than ably represented last Sunday at the fundraising concert to benefit the Terri Schindler Schiavo Foundation, by Executive Director David N. O'Steen, Ph.D., and State Organization and Development Director Jacki Ragan.

Held at the Murat Center in Indianapolis, Indiana, the concert was life-affirming in the best sense of the term. Obviously, the reason there is a Terri Schindler Schiavo Foundation is grim: Terri died when she was unjustly denied food and fluids as the result of a titanic legal struggle that went on for years and years.

But forged in that battle is a foundation that is dedicated to battling the mentality that people who are imperfect are "better off dead." And that love of life was on rich display.

Like almost everyone, I have enjoyed the music of Randy Travis and Collin Raye. Each is a music legend in his own right. Each performed for more than an hour. Each dedicated two autograph guitars, one of which was raffled off, the other auctioned to raise funds to help the foundation.

Full Article and Source:
Reflections on the Terri Schiavo 'Life and Hope' Concert
Posted by NASGA

There is a time to live and a time to die but, that is not up to man to decide!
I'm thankful that this family has taken a stand and a strong voice to make a difference.

I am so glad to see the Schiavo Foundation grow and this event really helped them.

I am so proud of this family and what they have accomplished after the horrible and tragic execution of their loved one.

The Terri Schiavo family sets an example for all of us.