When Should the State Step In? 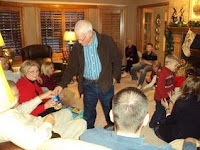 Life took a drastic turn for Bob Queener - and for the loved ones who believed they were doing their best to keep an eye on him daily - when he began to show signs of dementia. Without warning last December, the state removed Queener under police escort from the Des Moines home where he'd lived alone for four decades. He was placed against his will in a locked mental health unit.

For five hours the next day, his panicked relatives knew only that the 79-year-old had disappeared, said his sister Barbara Conrath, 74, of Bondurant.

Three months later, most of Queener's possessions were sold or thrown away by a stranger authorized by the court to control his property, said his brother Rich Queener, 65, of Prescott.

Several of Bob Queener's relatives believe workers with the state Department of Human Services acted too quickly when they sought court approval to have him removed from his home. They're also upset that a judge gave all authority over his life to people who don't know him or love him.

"I mean, my goodness, it wasn't right. It really wasn't," said Conrath, one of his eight living siblings.

Full Article and Source:
Elderly Care: When Should the State Step In?
Posted by NASGA

When should the state step in? When every rock has been turned, every crack checked -- every effort exhausted toward finding family. Only then.

Here we go...."possessions were sold or thrown away by a stranger authorized by the court to control his property..."

Why didn't the court authorize someone in the family to be guardian?

DHS isn't all bad, but when they are, they're real bad!

This man should be afforded his preferences.

The police "escorted" him from his home of 40 years? That's a tragedy and if Queener has dementia type symptoms, what the police did just made them worse.

Roger Munns should be ashamed. I bet if his Mother knew what he had done, she'd be ashamed of her son.

In his best interest give me a break.

Anyone want to volunteer themselves to have their money and property seized by the state?

To be dragged out of YOUR homea, locked up somewhere with strangers, while strangers invade YOUR home and sift through everything YOU own, then dispose of, dump, and steal YOUR good stuff - VOLUNTEERS? ANYONE?

I am steaming mad, just steaming when I see this. I would rather burn my house down with me in it to ashes than have strangers drag me away like trash, have my home invaded by strangers.

Look at all those siblings - were they notified? Sure looks like DHS was more interested in harrassing Mr. Queener than looking out for him.

Without warning?!!! Everyone who was involved in this injustice should be held accountable. What an outrage!

Is this old Nazi Germany?

It is absolutely a disgrace, that such can happen America - the land of the free..

I am writing in regard to the Bob Queener and his family. I think it is utteerly horrid that DHS has stepped in and done what they have done. This includes the courts. To be able to take a person's private belongings, his house, and God knows what is inhumane. DHS has way too many cases and always has. This is unforunate. My mother suffered from several complications and had I moved her out of her home and removed her most treasured belongings, she would have gone down hill rapidly. This is a sin for this man to indure.