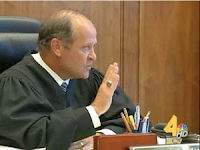 Things have only seemed quiet with the probate abuse case of Nashville musician Danny Tate in which Tate's lifelong accumulation of assets has largely been wiped out during a 32-month "temporary" conservatorship (guardianship) initiated by his brother David, facilitated by attorney Paul T. Housch and sanctioned by Davidson County Circuit Court Judge Randy Kennedy. But in the vein of things not being as they appear and courts not necessarily being about justice, the involved parties have been busy and a web site Nashville Criminals is documenting all the developments of this case which exemplifies questionable probate actions occurring throughout the U.S.

Nashville Criminals is a presentation of evidence by Ira Robbins, a Milwaukee-based investigative consultant, with nearly 50 years of investigative experience which includes working as a police officer, licensed private investigator and investigative consultant. Robbins provides documents alleging that David Tate used a fraudulent Durable General Power of Attorney to gain initial control of Danny Tate's finances which funded attorney Housch's October 2007 petitioning for the musician to be conserved.

Per the web site,

On October 19, 2007, David Tate filed a fraudulent PETITION FOR APPOINTMENT OF CONSERVATOR claiming Danny Tate was under the influence of drugs to such a point that immediate incarceration in the Vanderbilt Psychiatric Hospital for at least 30 days was absolutely necessary. Thereafter, Danny was to be conveyed under guard with David, to Boston where he would remain in a drug facility for at least a year or two The claim of such a severe addiction was absolutely false. Although Danny had been using drugs, Vanderbilt Hospital determined that his addiction was not as severe as David had reported and released Danny after just 6 days.

For 32 months, Danny Tate simultaneously fought to regain control over not just substance abuse, but also his civil and property rights that some court observers believe were hijacked by the Tennessee probate court. Only when Tate’s current attorney, Michael Hoskins, filed an extraordinary relief application did the Middle Tennessee Court of Appeals reverse one of Judge Kennedy’s critical case rulings, an act described by Nashville Scene as “meaning the Probate Court had strayed so far from established legal procedure that an extraordinary judicial slap on the wrist was dealt to Kennedy. More remarkable still, Judge Frank Clement, the jurist who issued the Appeals Court decision, used to sit in Kennedy’s seat in Probate Court.”

This court ruling basically acknowledged the questionable process by which Tate was conserved and forced Judge Kennedy to allow a hearing that would make the 32-month "temporary" conservatorship permanent or else the status would be terminated. The ruling finally allowed Danny Tate his "day in court."

Throughout early 2010, the case began receiving increased public attention starting with the Nashville Scene article, continuing with a FreeDannyTate.com web site and a Friends for Danny Tate’s Defense Facebook page as well as an awareness concert which all combined to help generate respectable buzz within a variety of other media outlets.

A May 24 hearing took place in a courtroom that included Tate supporters and a local television camera crew. The hearing quickly evolved into what seemed a scripted media event with Danny Tate's release from the conservatorship put front and center for all (especially the cameras) to see. "They saved him" seemed a recurring theme used to justify the 32-month legal ordeal which now leaves Tate destitute.

The day's victory played well from a public relations standpoint and was likely hoped to appease the supporters on hand, but the day's real outcome became evident nearly three weeks later upon Judge Kennedy signing the hearing final order.

Rather than signing a final order submitted by Danny Tate attorney Michael Hoskins that reflected the May 24 ruling, Judge Kennedy instead opted for a Paul T. Housch-written statement that gave the now-terminated "temporary" conservatorship of David Tate functional control over his brother's assets through a 60-day "wind down" period. This translated practically into further depletion of Danny Tate's estate by the "temporary" conservator despite Tate's "rights" alleged to be restored. Judge Kennedy further demonstrated support of this course at a June 11 hearing.

This background brings us back to the Nashville Criminals site where Ira Robbins has documented irregularities of the process leading to Danny Tate's current situation and also has provided updates on recent activity. This includes his letter to the Tennessee Attorney General and Davidson County District Attorney. Robbins also has posted efforts to reach out to members of the Tate family, David Tate himself and even the attorney for the Signet, the company owned by David Tate's wife, as Elizabeth Tate and company could be parties in future litigation.

The site also gives information on the case of Robert Thurman, another individual under a similarly questionably conservatorship initiated by Housch and approved by Kennedy.

In a post entitled They Finally Got It All, Robbins displays Danny Tate's "Respondent's Motion to Proceed as a Poor Person on Appeal" in which he submits he has been "thoroughly impoverished as a result of this conservatorship action." And the conservatorship - temporary or otherwise - was theoretically to protect both the ward and his estate? That's why the site is called Nashville Criminals.

Just Part of the Cover-Up gives hint to potential concern on the part of the "temporary" conservator David Tate as he has now petitioned the court (and presumably continued inflating his destitute brother's legal bills) to have a series of depositions entered into evidence at the May 24 hearing removed. Here's how Ira Robbins describes it:

On June 29, 2010, Attorney Housch filed a Motion to hide evidence that incriminates him and his co-conspirators for their criminal conduct. The depositions of David Tate and Dr. William Kenner provide ample evidence of their criminal wrongdoing. Now, Attorney Housch has asked Judge Kennedy to strike their testimony from the record. Even though those depositions were not used in a trial, they still contain enough evidence to convict the parties, including Housch, of criminal conduct. No wonder he wants to get rid of them. And just who do you think will get the bill for this motion? You guessed it. Danny will.

A final posting Fair Warning is the most recent posting and says this:

TODAY, PER AN OFFICIAL REQUEST, I DISPATCHED MY UPDATED 26 PAGE SWORN AFFIDAVIT ALONG WITH 250 PAGES OF SUPPORTING DOCUMENTS SEEKING A CRIMINAL INVESTIGATION TO THE NASHVILLE OFFICE OF THE FBI, THE US ATTORNEY IN NASHVILLE, TN, THE PUBLIC INTEGRITY OFFICE OF THE US ATTORNEY IN WASHINGTON, D.C., THE PRESIDENT OF THE UNITED STATES, THE TENNESSEE ATTORNEY GENERAL, AND THE DISTRICT ATTORNEY GENERAL OF DAVIDSON COUNTY TENNESSEE.

The Nashville Criminals site counter lists more than 6,600 visitors in but a few short weeks. It's hard to imagine the extended Tate family or associated lawyers promoting the site. Danny Tate's friends undoubtedly are watching. Hopefully an assortment of law enforcement agencies are also viewing and absorbing the facts associated with this case.

If what has happened to Danny Tate is an example of the legal system operating properly, God help us all! If it is an example of abuse and corruption, many agencies have been served "fair warning" and their reputations are additionally now on the line. So the next logical question: anyone ready for action? The Friends of Danny Tate continue their call for justice.

Get the bum off the bench - and put all the perps in jail!

this is the most outrageous account of seizing a person and his estate for absolutely no sane reason 32 months later and what benefit is there to danny tate??? zip zero nothing the only benefit is to the mob squad that the court room terrorists used to take every cent of danny tates money where is the judges eyes? ears? common sense? i hope and pray the citizens of nashville see what is waiting for them before its too late

Assult is the right word!

Never give up, Danny. We are counting on celebrating your victory!

Hey, does the state of TN even have a discipline committee? Are they awake?

Nashvillecriminals is a great site. Ira Robins is bowling them over and knocking down all the pins!

Danny Tate's positive attitude after all he's been through and the growing support for accountablility is inspiring. I am sure you will prevail, Danny.

Part of the word "conservatorship" is "conserve."

NO. It's a joke. A sad, sick joke and I hope they all get what's coming to them. (A nice long stay in the big house.)

Tom is bringing up an important issue about Danny Tate's character which speaks volumes.

Danny's amazing manner of conducting himself throughout this long painful ordeal, always a gentleman, always courteous is impressive. I cannot say that I myself would have been able to control myself nearly as well.

Congratulations! This is the best thing, Thank you so much for taking the time to share this exciting information.
Hecken

Congratulations! This is the best thing, Thank you so much for taking the time to share this exciting information.
Hecken