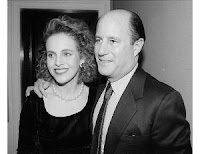 Inside a quiet room on an upper floor of a glimmering glass office building in Trenton sits a seemingly ordinary stack of documents.

But this is no routine legal tussle.

At issue is a tradition as basic to families as wedding rings and vacation photographs: Who ultimately has a right to an inheritance?

On one side stands the Cohen family of Hudson News fame, whose once-vibrant patriarch in Englewood is now rendered nearly immobile and virtually speechless by a degenerative neurological disorder.

On the other side is his former son-in-law, Ronald Perelman, a legendary corporate takeover billionaire and Revlon chairman with a take-no-prisoners reputation in his financial dealings. He's trying to convince a court to declare the elderly Cohen incapacitated.

Perelman says his daughter — Cohen's granddaughter — is entitled to half of the family's fortune, which has been estimated to be as much as $800 million by Fortune magazine. To get the money, Perelman wants to go where few court cases have ever ventured: He wants to rewrite the will of a man who isn't dead.

Perelman's lawsuit, which he filed as executor of the estate of his ex-wife, was dismissed a year ago by a Bergen County judge, who just last month sanctioned his lawyers for "overly aggressive" tactics and ruled that one of Perelman's central legal claims was "frivolous."

Where this case will lead is an open question. Already, this bitter conflict has touched on such issues as a family's right to privacy, its ability to protect its business interests, and broader ethical and legal questions about the rights of the disabled and elderly to make decisions in their wills.

This is another example of the meaning of life, to many it's the net worth of a person in their last stage of life.

So this is essentially another article about the legal abuse which our legal system tolerates.

Why is it that America tolerates so much legal abuse? Is America's Constitution as deficient as others when it comes to tolerating this abuse? Does America today have a problem with too many people, especially those who serve the courts (including lawyers, judges, guardians, and APS workers), doing just what is easy and makes them $$$, accepting the law as it, even when they know the law is lacking, rather than doing what they should, which is fight to improve the law? Isn't this the same problem which plagued the legal system of Nazi Germany, as eloquently described by (for example) Leon Uris in his 1965 book Armageddon, and which led to many documented atrocities as well as WWII. Is America capable of overcoming the legal profession’s resistance to preventing such abuse, which includes those abuses about which so many of us have complained, many of which are similar to the abuse reported here.