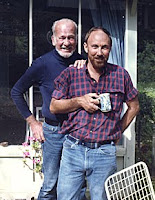 Sonoma County has agreed to pay $600,000 to settle a lawsuit by an elderly gay man who said social workers kept him from seeing his dying partner in the hospital.

Clay Greene, 78, of Guerneville filed a lawsuit earlier this year, claiming the county's Public Guardian program discriminated against him because of his sexual orientation.

Greene accused social workers of denying him hospital visitation rights to see his partner, Harold Scull, despite signed wills, medical declarations and powers of attorney naming each other as spouses. The couple was not married nor registered as domestic partners.

The lawsuit also alleged that after Scull's death, social workers forced Greene into a nursing home and sold the couple's property, including art and heirlooms.

"The county remains confident in its position that there was no discrimination in this case," Spaulding said, noting that the plaintiff removed the discrimination allegations from the lawsuit three weeks ago.

Under the law, officials can sell property worth $5,000 or less to cover medical expenses, but the couple's property sale brought in more than $25,000 at auction, Spaulding said. Errors in that case have led to revised policies at the Public Guardian's office, he said.

"It just made economic sense to stop the bleeding," Spaulding said. "To end the case and avoid all expenses and costs."

It's not just discrimination at play here. Isolation is a weapon used by guardians when family or friends try to look into the care given their loved ones. It's all too common. This couple had an edge - existing "discrimination" law! These other cases should be filed as "human rights" violations.
What good is the Patients' Bill of Rights, if it's not enforced?

Right, Anonymous. This is a victory against isolation!

I am glad to see this result. Perhaps if more wrongdoers were fined, they might sit up and fly right.

This is a victory for all victims of isolation.

Extremely glad to see the victory against isolation but still feel it is so sad. Had these men not been gay one has to wonder... would they have still had a victory?

Congratulations! My only wish is that non-gay families would have the same success - highly unlikely.