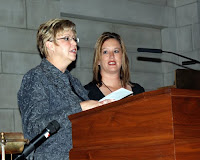 A case of an Omaha woman convicted of cheating people she was appointed to protect out of hundreds of thousands of dollars helped trigger an award-winning program in Platte County Court.

The two Columbus women received the Outstanding Customer Service Award during the Supreme Court’s employee recognition reception at the Governor’s Mansion in Lincoln.

There are nearly 1,000 employees in the judicial system in court and probation offices statewide.

The award honored Schiefelbein and Hein for implementing an “effective and creative program” that improved customer service to the court’s customers.

The problems with Douglas County’s conservatorship system that surfaced earlier this year were a catalyst for bolstering the local system, said Schiefelbein, who heads the Platte County Court’s office staff.

“We did need to tighten the reins,” Schiefelbein said of the local process that ramped up scrutiny of the system. “We’re looking out for the protected person, that’s our responsibility.”

I am glad to see these women recognized. I wish we could read their work, though.

Congratulations. The people of Nebraska are in your debt.

Eyes are starting to open on the crooks in team probate.

Yes, I agree with StandUp open those records, let's see the dirty deeds open records is a must. I wonder how many people complained.

I am pleased to see reward for protecting the elderly. Congratulations to you both.