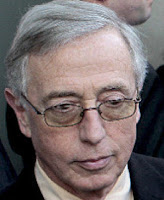 Former Luzerne County Judge Mark Ciavarella was given a sentence that may not be for life, but will keep him in prison until he is 89 years old. U.S. District Judge Edwin Kosik sentenced Ciavarella to 336 months in prison - 28 years for a man who is 61.

The sentence came after Ciavarella opened remarks with apologies to family, friends, the public and juveniles,then turned defiant and repeated his claim that he never took money in exchange for sending juveniles to private detention facilities.

Ciavarella initially apologized to family "for the hurt and embarrassment I caused them by my irresponsible acts." He apologized to the "Citizens of Luzerne County for violating the trust they place in me, and I hope they can some day forgive me. He apologized to the court bench and attorney's bar for shattering public trust. And to the thousands of juveniles who had appeared before him.

"Forgive me for being a hypocrite by not practicing what I preached. I would hope that they would learn from my mistakes and realize that everything we do in life has consequences and that there are dire consequences when we make decisions we know are wrong."

Full Article and Source:
Ciavarella Sentenced to 28 Years in Prison

His refusal to come clean even when convicted is a symptom of the entitlement many court officers engage in when they operate with no checks and balances in place. His actions while on the bench and at his sentencing hearing reveal an unrepentant man. But its a good start and may bring some, but only some relief to the people and families he harmed. Very sad commentary on our broken judicial system.

I hope it brings them relief Izzy. There is nothing that can take away the years of suffereing, pain and fear than what judges, appointed lawyers and guradians has caused the innocent families of this cruel system of injustices.

My heart goes out to Mary Conners and her mother that she fought so hard. This woman I know is the only the person who has litterly given up everything to save her mother. Tears are coming to my eyes what she has gone through.

One thing I learned from Mary is that I will not let this county do this to me as what she has experienced from this court and this judge.

Going to jail is not enough. They need to feel what we feel. At least in jail he will get to visit his loved ones, in jail he will get 3 meals a day, a roof over his head, TV, books, and access to a library, etc... and when he gets put will still have his nest egg stashed away somewhere.

I am thinking of you today Mary Conners and how this must make you feel. Not even remotely close to justice if the victims could sentence the culprits of the broken, corruption, and good ole boys club crimes.

I agree. He has no remorse. His "apology" was just words.

two,three, four of which I can think of right off the top of my head