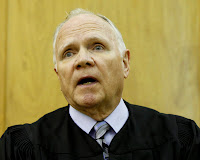 Just weeks before retiring, long-serving St. Joseph Probate Judge Peter Nemeth was officially reprimanded for making inappropriate comments to a woman seeking guardianship of a deaf teenager.
The Indiana Supreme Court accepted an agreement Dec. 14 between Nemeth and the Indiana Commission on Judicial Qualifications that Nemeth would be sanctioned with a private reprimand, according to court documents.
Nemeth, who was also a South Bend mayor and city councilman, stepped down from his position at the end of December after serving as probate judge since 1993.
The Indiana Commission on Judicial Qualifications, which handles allegations of judicial misconduct, filed a complaint in August stemming from two 2011 guardianship hearings.
Full Article & Source: Now-retired judge sanctioned during last weeks on bench

Of course, we don't know what discipline St. Joseph Probate Judge Peter Nemeth did get in the end -- a slap on the wrists?

If he'd lost his retirment, that would be about rightl

He should be disbarred and his retirement should suffer too for crying out loud!

He should be disbarred and his retirement should suffer too for crying out loud!