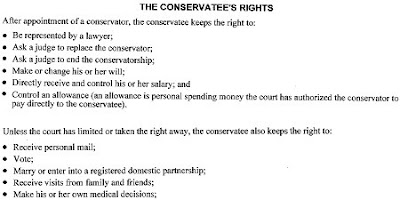 This Examiner contacted Jamison for an interview and welfare check with June Guinn. Jamison refused and said, “That would be a HIPPA violation.” The U.S. Department of Health and Human Services specifies that HIPPA covers only medical information. HIPPA does not apply to an individual's location or general condition.

Advocates filed a complaint with the Professional Fiduciaries Board on Jun 9, 2013.

She must be alive or the conservator would have dodged the question another way.

I thank all of you, from the bottom of my heart, for helping to find and to save my Mother, June Guinn's life. No doubt, that Mom is not where she should be, under Laurie Jamison's care and by all Probate Laws.I honestly, believe that, when Mom is found , if it is soon, they will find her mentally and physically abused
Laurie, is allowing another person, to receive benefits and Veterans for Mom. All of this is illegal and Federal fraud. This is what Laurie would be hiding too. They are no doubt, scrambling to cover-up .
To all of you wonderful people, STOP ,The Examiner and to Linda Kincaid too and so many others , I am forever grateful for you dedication and help "thank you so much"

Shame on the guardian!

We are praying you find your Mother, Lynda, and that she is safe.

Thank you, Linda Kincaid, for writing this article and bringing awareness to June's plight. Isolating an elderly person from family and friends is inhumane treatment and should be classified as criminal.

I join all those at NASGA who are prarying for June's return to her family.

I join in thanking Linda Kincaid for taking action in the right direction - the source of the problem is the CONSERVATOR Laurie Jamison. Where is June Guinn? And why are you hiding her from her family? I pray June is alive and as well as could be expected. I hope there are severe consequences for the cruel inhumane treatment used as punishment for the family. Shame shame shame on you Laurie Jamison and how many other victims in your case files? And, remember KARMA is a *****!

Let's hope the guardian does the right thing now and allows June to see her family. I can't imagine how she has suffered all this time, missing her family. Or did the guardian tell her that her family has deserted her? Even if the guardian did brainwash June, she knew her family didn't desert her and she's been in hell since 2008.

After all the years now of dealing with this situation, seeing Grandma happy and doing what she wanted the last time I saw her..... to both Mom and Grandma's lives turned upside down is beyond comprehension.

I have first hand knowledge that she was happy with my Mom. The whole family should be ashamed at everything that has taken place after Grandpa passed away. Guess you really can't fix stupid.
It all boils down to greed, unethical behavior, a broken legal system, power, manipulation, and downright evilness. As Sue said about Karma.....

When the time is right, all this will be proven and the people who are responsible will be punished. Maybe it's something in the water there in Modesto. Those of you from that area know what I am talking about, LOL.