Couple Arrested for Exploitation of the Elderly 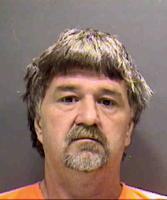 A husband and wife were arrested Thursday for stealing from a disabled World War II Veteran who allowed them to live in his home, according to the Sarasota County Sheriff's Office.

The 87-year-old victim contacted deputies in September when he discovered a few pieces of his jewelry were missing, according to a report. He later realized a large amount of jewelry that belonged to his late wife worth an estimated $50,000 was also stolen, the report states.

Kevin Babbidge and his wife, Christina Babbidge, have known the victim for 10 years and moved in with him in late August to help care for him, the report said.

Detectives learned that within days, Kevin pawned several pieces of jewelry, but also found records showing he pawned items believed to have belonged to the victim in 2012, when he was paying Kevin $200 a week to clean his home, a report stated.

Detectives have recovered about $7,600 worth of jewelry taken from the man's home. Both suspects pleaded with the victim to allow them to make restitution and not press charges, a report said.

Full Article and Source:
Couple Arrested for Exploitation of the Elderly
Posted by NASGA

Stealing from an elderly Veteran? What a vulture!