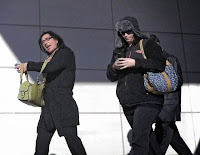 Authorities say an elderly Emmaus woman died of a broken heart after finding out virtually everything she owned had been stolen from her, but attorneys for the three people charged with the alleged thefts insist their clients didn't steal "a dime."

Two of the three defendants, one of whom had owned the former Emmaus Diner, cared for Queen E. Hersh, 90, and benefited from her generosity but didn't take any money without her knowledge, the attorneys said Wednesday during opening statements in the trial. The third defendant had almost no involvement at all, her attorney argued.

Lehigh County Chief Deputy District Attorney Charles Gallagher told the jury that Hersh died in December 2008, months after she received a foreclosure notice in the mail and learned she had been taken for more than $260,000.

I believe people can and do die of a broken heart.