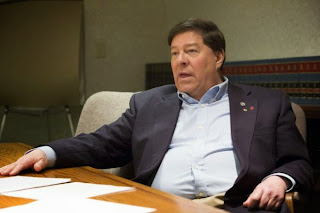 A Columbus lawyer who a few months ago boasted that he probably acted as guardian for more people than anyone else in the nation has resigned from all his cases and briefly checked himself into a local hospital for mental-health treatment.

Paul S. Kormanik filed his resignation with Franklin County Probate Court on Aug. 26. He once had about 400 wards; now the hundreds he had left have been temporarily put in the custody of Groveport attorney John Mashburn until the court can find permanent guardians.

Kormanik did not return emails or calls to his law practice seeking comment on Thursday or yesterday.

Mike Moran, the court’s chief of staff, said on Wednesday that Kormanik will no longer be associated with the court. Several people who know Kormanik said he checked into Dublin Springs, a mental-health treatment facility, for observation.

Moran said the court was in the process of removing Kormanik’s involvement in guardianship cases.

Almost all of Kormanik’s law practice consisted of guardianship cases. To oversee many of them, he was paid thousands of dollars per case annually.

In an unprecedented move last month, the court began taking wards away from Kormanik after a five-part Dispatch series, “Unguarded,” showed how the guardianship system has been abused. Stories specifically questioned Kormanik’s billing practices and his extraordinary caseload.

The court removed about 50 of Kormanik’s wards last month and placed them in the care of Advocacy and Protective Services Inc., or APSI, which helps people with disabilities.

How could anyone possibly take care of the needs of 400 wards!!! sickening!!

Jewish Family Service of Tidewater has about 560 "clients."

Catholic Charities of Eastern Virginia has about 184 "clients."

In their zeal to become the biggest public guardianship programs in the country, these agencies have forgotten their very purpose: the protection of the elderly and disabled.

Five minute rubber stamp sessions in front of a specially chosen judge, with just the hand-picked guardian ad litem "for" the incapacitated person present, are not the exception, but the norm. These programs actively cheat people out of their statutory and constitutional right to an attorney, and go to great lengths to make sure that neither the "client" nor family members or other concerned citizens know about or attend the court hearing, all to prevent the judge from hearing the truth.

When problems inevitably arise, the hand-picked GAL simply blows off phone calls and communicates a series of outrageous lies to the court ex parte. If the GAL is forced to respond, she tells these indigent people and their family members that they can hire another attorney, at thousands and thousands of dollars, to seek court review or change of the guardianship. She then obstructs that court hearing by any means possible, including further lies and ex parte contacts.

As a result, an untold number of helpless, voiceless incapacitated people are stuck in dysfunctional, even dangerous, public guardianships, while a handful of sleazy lawyers laugh all the way to the bank.