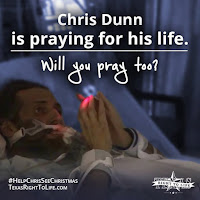 By Texas Right to Life

His mother, Evelyn, is his Medical Power of Attorney and trying to ensure that Chris continues to receive life-sustaining treatments that the hospital is attempting to remove. Methodist has invoked the statutory process found in the Texas Advanced Directives Act (TADA-Chapter 166.046 of the Health & Safety Code), which allows the hospital to override medical directives of a patient and provide only ten days’ notice before involuntarily withdrawing life-sustaining treatment.

Dunn’s only recourse is to find another facility that will offer him an ICU bed – a daunting task on a rushed time frame for anyone, but even more so when the hospital has determined to end your life.

Last week, Chris’s mother was granted a second two-week extension of the 10-day period to find another facility, a task made even more difficult because the hospital will not provide a diagnosis of Chris’s condition. The same day the extension was granted, however, Methodist filed an injunction seeking custodial guardianship of Chris. The hospital is thus attempting to prevent Evelyn from representing her son and defending his right to continue receiving care.

In November when the hospital initially attempted to remove care, Evelyn contacted Texas Right to Life, which has assisted the family in the difficult legal process and provided legal assistance.

Yesterday, the lawyers representing Chris and Evelyn, Trey Trainor and Joe Nixon, contested Methodist Hospital’s attempt to seize guardianship. Trainor and Nixon are the same lawyers who appear in video documentation of Chris communicating his desire to continue receiving treatment and for his mother’s attorneys to fight on his behalf.

In court documents filed today, Trainor and Nixon note this video evidence that Chris is alert and responsive, only intermittently sedated depending on the dosage of medication.

The court documents filed yesterday reveal that Justine Moore, an employee of Methodist Hospital, applied to be Chris’s Permanent Guardian. As Trainor and Nixon note, Chris lived with his mother before his illness and has since indicated that he would prefer her to speak on his behalf before anyone else.

Furthermore, as a former EMT, Chris is well aware of what life-sustaining treatment entails. When asked explicitly if he wants to continue receiving such care, he clearly communicated that he does.

Finally, and most shockingly, Trainor and Nixon point to the inappropriate nature of Moore’s application for guardianship. Moore was the very same employee who revealed to Evelyn the hospital’s desire to remove care. She cannot therefore be an impartial guardian, and there is evidence that she would in fact be acting directly contrary to Chris’s wishes for his own medical care.

Texas Right to Life condemns Houston Methodist Hospital’s legal maneuvering to force their anti-Life quality of life judgments upon Chris. Until now, the hospital has been hiding behind the unethical, unconstitutional, and unprecedented Texas law; however, now that a judge has shown skepticism at the process allowed by law, the hospital is going out of their way to remove the little legal protection Chris still has, his Medical Power of Attorney. This reveals the lengths to which this hospital will go to ensure that the final authority of these Life and death decisions remain in the hands of the physicians and hospital that does not see Chris’s life as worth living.

Editor’s note. This appeared at texasrighttolife.com

See Also:
Hospital Trying to Seize Guardianship of Disabled Patient From His Family in Order to Kill Him

Praying with everything I have for Chris Dunn.

No family should have to go through this. I join in praying for Mr. Dunn.

I hope the Right to Life people come to his aid.