Fallen HPD officer's children fight for rights to his estate 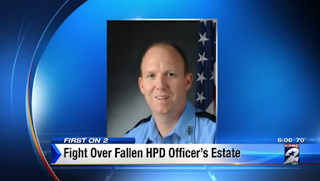 HOUSTON - The head of the Houston Police Officers Union is raising new concerns about how the estate of a slain policemen is being administered.

HPOU President Ray Hunt said he is not sure the best interests of the fallen officer's children are being protected.

Officer Richard Martin was killed when a car fleeing police struck him during a chase last May. His 11-year-old son and 22-year-old daughter were his only heirs. The bulk of the estate consists of a small house in the 3500 block of Windmoor in Katy valued at $85,000, and its contents.

Two weeks ago, Hunt said boxes of items were removed from the house by family members who have no claim on the estate, with the approval of the court administrator appointed to protect the children's interest, former State Rep. Robert Talton.

“Those kids deserve every single thing that their dad has left them.” Hunt said.

A neighbor snapped photos of a man and woman taking boxes out of Martin's house on Jan. 13.

Among the items taken, according to the children's mother, was the flag that covered Officer Martin's casket at his funeral.

Hunt said the children’s' estranged aunt, Karen Taliaferro, and her husband, were allowed to remove property from the house by Talton.

It's not the first time that's happened. In December, Martin's daughter told Channel 2 News that Talton ordered her to move out of the house, and at that time, allowed Taliaferro to remove household items.

Denise Ward, an attorney representing Martin's son Tyler, told Channel Two News in December that Taliaferro shouldn't have been allowed on the property.

“She has no standing. She has no pecuniary (and) no monetary interest in this estate.” Ward said.

Ward declined to comment about the second incident Monday because she said the judge in the case, Judge Rory Olsen, filed a complaint against her with the State Bar after the story aired on Channel 2 in December.

“It's unfortunate. For some reason the sister and brother-in-law of the deceased officer have more rights than the children of the officer.” Hunt said.

Hunt said the family has been given no explanation of what was taken from the house or where the items are now. He blames Robert Talton for allowing the property to be removed.

Mr. Talton refused comment when reached by phone Monday, saying, “Anything I have to say, I'll say in court.”

We tried contacting Judge Olsen. Political consultant Allen Blakemore returned our call to inquire what questions we had for the judge, but so far Judge Olsen has not commented.

I agree that the kids deserve everything he has left them. That's what he would want.